Amongst the mass of presents was the cd soundtrack of the 2009 series of THEPRISONER, marvellous, wonderful, and having played the soundtrack 6 times, I have a real appreciation for it, and I bet that's more than most can say. Here is the front and back cover. 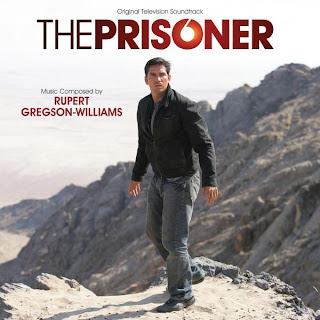 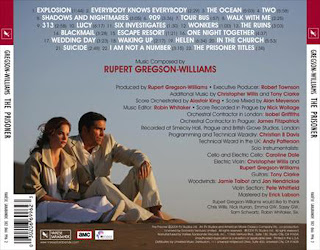 This is one cd which I have wanted since I becamse aware of the 2010 premier here in the UK. Indeed, in January I went to my local HMV store in order to order the cd, but was told that it had been deleted from the sales list. This some months before the premier. So there is no-way I could buy this cd here in the UK, save via the Internet, but for reasons of my own, I didn't. So, this cd sountrack came either from America, or Switzerland, the countries from which this soundtrack is available, but no-one will tell me. But it has to be one or the other.
I can understand why this soundtrack was deleted from the sales list, it's music hardly grabs you in the same way as the soundtrack to the original series. Sometimes the music is in the background and you hardly notice it. It's not discriptive music, not scene setting, nor is it stand alone music. It's more ..................something, well its's something I'm happy to own, as it's going to be a real collectors item, especially here in the UK.
Be seeing you.
Posted by David Stimpson at 08:57