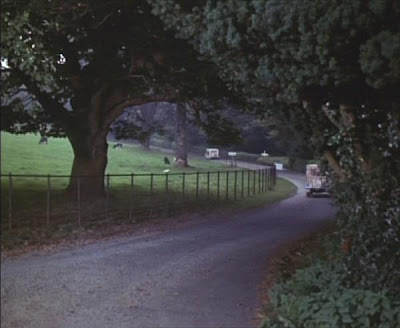 The above picture is taken from the Prisoner episode Checkmate, and it is presumed that the driver of the leading taxi is that of No.8. In the taxi behind is No.6 and the Rook. However, it is very plausible that it's not No.8 behind the wheel of that leading taxi at all. You can perhaps see more clearly in the following enlarged section.

The truth of the matter is, that during September 1966, while the Prisoner was being filmed at Portmeirion, guests were still staying at the Italianate village, that being one of Clough Williams-Ellis's stipulations for allowing the filming to go ahead. That guests would still be allowed to stay at Portmeirion, and not be disturbed, also day vistors to be allowed into the village. So when I say that may not be No.8 behind the wheel of that leading taxi, it might very well be an employee of Portmeirion on his or her way to Minnfford railway station, just a mile or so away, to collect a guest staying at Portmeirion, or taking a guest to the railway station. Many of the taxis seen about the village, had Portmeirion employees as drivers. In this way guests could be moved about the village without disrupting the filming which was taking place there. And of course, equally important to Clough Williams-Ellis, it also meant business as usual at Portmeirion.
Be seeing you
Posted by David Stimpson at 08:20