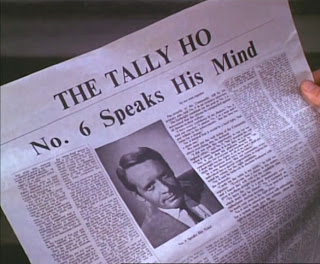 No.6 speaks his mind......well that's as maybe. But it's not so much the words put into No.6's mouth that interests me here, as the accompanying picture. Of course it's Patrick McGoohan's publicity photograph. But I wonder why this particular photograph was used? I mean No.6 is in civilian attire. Surely No.6 should have been pictured wearing his piped blazer, seeing as this is the village newspaper!
And here again for another issue of The Tally Ho, again No.6 is pictured in the clothes he was wearing on the day of his arrival in the village. 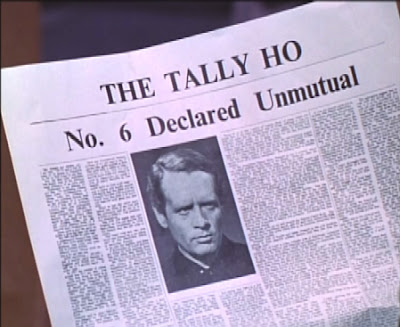 Those fans of the Prisoner who have facsimiles of The Tally Ho, will know that only the piece written about the Prisoner-No.6 makes any sense. All the remaining text of the newspaper makes no sense at all, because it is made up from different 'real' newspaper and magazine articles, all cut up and pasted together in a sort of higgledy-piggledy way to create The Tally Ho. This to produce a newspaper, which back then, no-one was likely to see outside the cast and crew of the Prisoner. My point of the matter is, that someone in the properties working on the production of the series, was put to a great deal trouble about something which the television viewer would be most unlikely to be able to read on the television screen. It's not really important, just something I've found of interest over the years.
I have  a couple of reproductions of both issues of The Tally Ho used in Free For All and Hammer Into Anvil.
Be seeing you
Posted by David Stimpson at 08:56