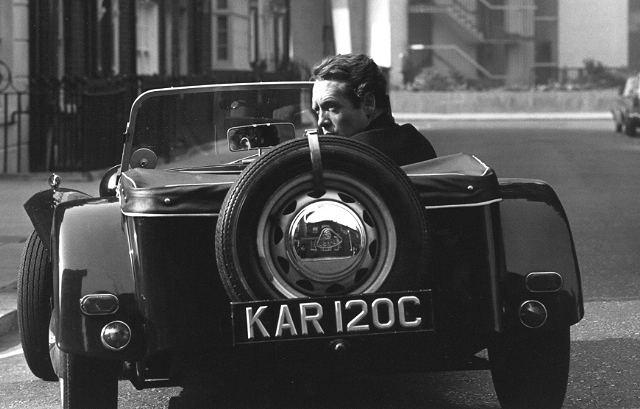 Would you accept a lift from this man? Well he certainly took us all on a journey didn't he? And am I right in thinking that not all of us arrived at the same destination? By this, I mean arriving at the same conclusions, after the roller-coatser ride we were given my Patrick McGoohan behind the wheel. McGoohan managed to capture us all, and to be quite honest I've proved to be the most willing of Prisoners, gripped as I was right from that first clash of thunder as darkened clouds gathered over a long and deserted runway in the first moments of the opening sequence, which I feel is the most powerful opening sequence of any television series I have ever watched. Patrick McGoohan managed to keep us guessing, giving few clues as to what it's all about. Even with Fall Out we were completely Humbugged! "It's an allegorical ending to an enigmatic series" McGoohan said, trying to humbug us again. "Rubbish!! many thought at the time. All I could see was a James Bond ending, and in that Fall Out was quite simple. But that was seeing Fall Out through the eyes of a child, and not trying to rationalize it with the mind of an adult! It was said that McGoohan had inlaid the Prisoner with 'hidden messages.' But I've never found any so termed hidden messages, and neither has anyone else as far as I know. In fact McGoohan admitted that there are no 'hidden messages' in the Prisoner, and concluded that far too much is being read into the series, things which are simply not there, nor was ever intended to be there! But the Prisoner is all down to individual interpretations. It can be a long and arduous journey which McGoohan takes us on, but one that is well worth while even though the destination one arrives at, is in itself ambiguous. In the end, and during Fall Out, it is No.48 whom teaches us all a lesson as he tries to thumb a lift somewhere along the A20 between Dover and London. Thumbing a lift on either carriageway. Because it's not the the destination that is important, it is the journey taken that matters.
I'll be seeing you
Posted by David Stimpson at 09:17