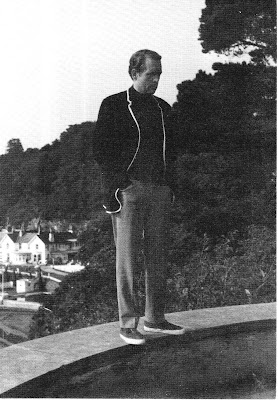 Dance of the Dead and No.2 asks No.6 if the's thinking of jumping. "Never," No.6 replies. You see No.2's concern was for the high suicide rate which the Village has to endure. At least two that we know of, Cobb, yes I know that never happened, and No.73 early on in Hammer Into Anvil.
Death might be an escape, but it would seem that No.6 is in no rush to do so!

I have stood where Pat McGoohan has stood, acted the role of No.6 in the scene between No.2 and the Observer-No.240 of Dance of the Dead. You can't do it now though, standing where Paddy is standing, because there are railings all round that cliff outlook. For those who do not know Portmeirion, there is a sheer drop of some 100 feet down to the beach from the toip of that round outlook.
BCNU
Posted by David Stimpson at 07:46