"Those are the days, the days that are gone. The faces forgotten, the memories linger on.....Southminster." 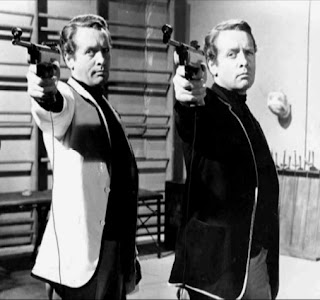 No.6 "Well I'm pleased to say I don't shoot like you!"
No.6 ""I hit the target."
"Yes, but only in the arm old boy."
Look, I'm getting a bit fed up with all this. What are you trying to prove?"
"That I'm you, and that you are somebody else."
"Who?"
"Oh I don't know."
"Yes, but you must have some idea of who I am?"
"You claim to be Number Six."
"Yes, yes that's right. Number Six."
"But I'm Number Six old boy."
"Just a minute!"
"What?"
"Number Six wears a dark blazer with off-white piping."
"Does he?"
"Yes. And which one of us is wearing a dark blazer with off-white piping?"
"You are."
"So, case proven. Because since when did Number Six go about the Village wearing a cream blazer with black piping?"
"About a month ago. I needed a new blazer. Besides it makes a nice change, don't you think?" 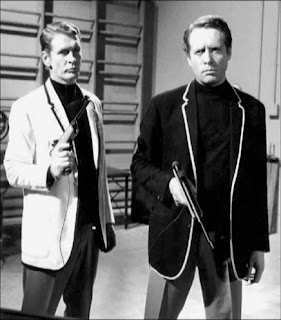 No.6 "Just a minute! Who the devil are you supposed to be now?"
"Let me be Frank...."
"If you like. Just as long as you stop pretending to be me."
"Why should I pretend to be you, do I look like you?"
"Well you certainly look more like you than I do!"
"Yes, but from the back we're hardly indistiguishable from one another."
"Is that why you are only filmed from the back view?"
"Well it helps maintain the illusion."
"Illuison, illusion of what?"
"That you do all your own stunts, when all the time it's me! Remember that time when I was carrying that Cuckcoo clock in Hammer Into Anvil....."
"Yes, I had to carry it across the street for you, a particullarly dangerous stunt that. Call yourself a stunt- man!"
"Look, lets not fall out. Shall we sing the old school song?"
"If you like."
"Those were the days, the days that are...."
"Just a minute. Didn't you go to Narkover school?"
"That's where I learned to box. Captain of the boxing team I was."
"And I was Captain of the Ratcliffe boxing team........I'll get the gloves!"
"Good. I can't wait to give you a thoroughly good dusting down!"
BCNU
Posted by David Stimpson at 08:34