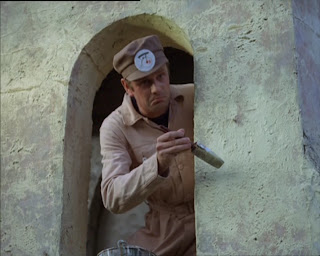 This is No.42 who is painting a yellow archway. In Checkmate he is questioned by No.6 and the Rook about his painting, saying that if they're not satisfied, he'll paint it again. But both No.6 and the Rook appeared to be satisfied with 42's work, and stating that they'll be in touch.
Later in the episode No.6 again approaches No.42 with the code phrase Tonight at moon set, Rook to Queens pawn 6 check. The thing is, No.42 is still painting that arch! It would appear that although No.6 and the Rook were satisfied, well someone clearly wasn't. Or is it simply a case, that 42 was drawing the job out, making the job last!
Be seeing you
Posted by David Stimpson at 08:56