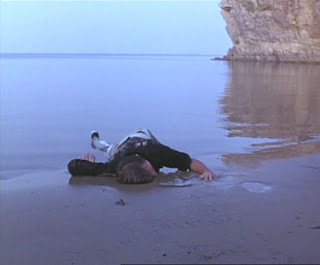 I have arrived at the conclusion that the dead body found by No.6, having apparently been washed up on the beach, is that of No.34, who had been under observation by No.240, but who later had been reported by the Supervisor-No.22 as having died.
We know the dead man had been a citizen of the Village, because there was a photograph of the dead man with a young woman sat together by the pool and fountain in the central Piazza. Who the young woman was, is unknown {although in actual fact she was a member of the Prisoners production crew}.
The man had a radio in his pocket. Obviously he was able, somehow, to smuggle the radio into the Village with him. Because there was nowhere in the Village he could have acquired one. So perhaps No.34 arrived at the Village of his own free will, being able, somehow, to smuggle a radio into the Village. Remember No.2 of Hammer Into Anvil was able to smuggle a shooting stick sword into the Village with him.
So was the radio message, picked up on the radio, and heard by No.6, meant for the dead man No.34? In all probability, I would say it was. But it would also appear that this man, planted in the Village for whatever reason, had been left hung out to dry by his own people. Because after Tonight when the moon rises, the whole world will turn to silver.................. the message goes on that the appointment cannot be fulfilled {so perhaps the dead man was expecting an arrival in the Village, something to do with him}.But that there are other things to be done tonight. Meaning more important things than arriving in the Village to do whatever, or to extract No.34 from the Village. Either way, No.34 was stuck in the Village with no possible way out!
So how did No34 die? In all probability it was at the membrane of the Village Guardian. Perhaps No.34 was caught out after curfew time. Half suffocated, half drowned to death in the water, or on the beach that night.
So No.6 listened to the message, and took it to mean that someone, someone from his world might very well be coming to the Village. That's is waha brought him down to the beach that evening in Dance of the Daed, to see if there was a light, a boat, or a plane, someone from his world. But there was nothing and no-one!
So why was No.34 sent to infiltrate the Village? Well we'll never know I'm afraid. And after all it is but my own personal opinion, theory, and conclusion arrived at, after studying certain facts. But if No.34 was an agent who had managed to be planted in the Village, he would not have been the first agent to take on such an assignment.
John Drake managed to infiltrate a typical English Village, Colony Three somewhere behind the Iron Curtian. Coloney Three, a training school for spies. Drake was planted in the fake Town of Hamden as Robert Fuller. But unlike No.34, whose own people seem to have hung him out to dry in the Village, John Drake had a contact in Sekcja {Section} 1 who had Drake withdrawn from Colony Three. Drake was the first to be withdrawn from Colony Three. Because really, those who are recurited to, or disappear to Colony Three.......................... then cease to exist!
Be seeing you
Posted by David Stimpson at 09:23