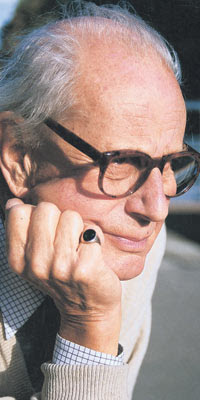 It was yesterday when I learnt of the passing of film director Pat Jackson, who learnt his trade on the 1936 film Night Mail, and who went on to make one of the finest wartime films Western Approaches.
His best Television work was done with a young stage actor he had introduced to the screen, Patrick McGoohan in episodes of Rendez-Vous, Danger Man and McGoohan's brainchild the Prisoner having directed episodes A B & C, The Schizoid Man, Hammer Into Anvil, and Do Not Forsake Me Oh My Darling, whose cult status ensures that, unlike most of Jackson's work, it remains in circulation.
It has to be said, that Pat Jackson was a cantankerous film director, and perhaps that is why he got on with Patrick McGoohan, and why McGoohan had so much respect for Jackson, as McGoohan could be cantankerous himself, two of a kind it could be said.


Be seeing you
Posted by David Stimpson at 08:12