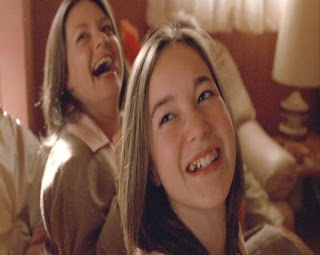 This is 16's family in the final scene of Harmony, as Six has arrived at their home to tell them about the death of 16, as it appears in the 2009 ITV transmission of THEPRIS6NER, and also of the episode in the ITV DVD box-set of the series. An ordinary looking family, but then why are they laughing at Six who has brought them such tragic news?
So why is it, that in this very same scene of the AMCtv transmission in America, has 16's family wearing pig masks as seen in the following picture? 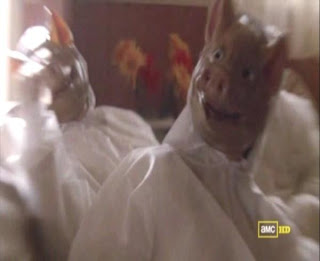 I can understand the surrealness of the scene now, that 16's family are taunting Six because he doesn't like pork. What I don't understand, is why this scene was altered for the British screening! Did the AMCtv producers think that seeing the scene as this might upset some people on this side of the Atlantic, people who do not eat pork? But I'm sure that the same can be said on the American side of the Atlantic. Other than that it is quite inexplicable, and I don't undersatdn the need for the change!
Be seeing you.
Posted by David Stimpson at 08:10