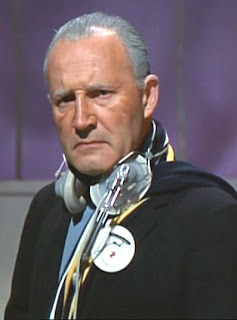 'Fill him with hallucinatory drugs. Put him in a dangerous environment. Talk to him through microphones. Give him love, take it away. Isolate him. Make him kill, then face him with death. He'll crack. Break him even in his mind, and the rest will be easy.'

Well it wasn't, in fact nothing is easy when it comes to No.6. The porblem is that No.2's hands are more often than not tied with 'no extreme measures to be used yet.' They did try and trick the Prisoner into talking, but not even the tears of No.66 would move him. Then they allowed No.6 to try and escape, just to teach him a lesson. But they don't want No.6 broken, they don't want a man of fragments, well at least not in the early days. Then having only three days to gain the reason behind the Prisoner's resignation. Oh and of course we musn't damage the tissue! I mean what's all that about, No.1 looking after himself as usual I expect. Then the new No.2 told No.6 that they have many ways and means, but do not wish to damage him permanently. The doctor No.40 and later 22 both saw that everyone has their breaking point, and had they had their way, No.6 would have either ended up like No.42, or possibly as one of those brainwashed imbiciles in the Council Chamber, or worse docile and complicit! 'There are other ways' No.2 once said, and when they tried those other ways they failed to get it right, or they made the grave mistake of underestimating No.6.
They tried to trick him. Experimented on No.6 with a new drug. gave him the opportunity for power. They took away his identity, and faced him with himself, on two separate occasions! Oh they saw to it that No.6 went on a nice little sea voyage, but made sure he arrived back in the Village in the end. They saw him sentenced to death at a trial. Allowed him enough rope to hang himself, in a manner of speaking, by selecting reliable men, and organising an escape, the Rook putting to No.6 his own test. No.6, then having been declared unmutual, saw to it that No.6 thought that he had undergone the operation known as Instant Social Conversion. They changed his mind, got him to tell a blessed fairy tale. Put him in a dangerous environment, making him kill, and faced him with death, then regressed No.6 to his childhood, and finally faced him with himself, they'd tried that one before. It didn't work the first time, and it didn't work in Fall Out! No.2 once said that No.6 has never understood them, that they never fail.....I think No.2 should take a close look in Visual Records, and then he might have revised his statement!     Be seeing you
Posted by David Stimpson at 08:46