Answers Might Be A Prison For Onself…….
………But What Is The Question?
The Prisoner has been described as being an angry young man. Well the Prisoner was hardly a young man at the age of 38, that makes him middle aged in my book! And why was he angry? Well wouldn't you be, if you were abducted from your known environment and placed somewhere alien to you - such as the village?
Well okay, the Prisoner was angry before his abduction to the village, venting as he did, his anger at that balding, bespectacled man, sat behind that desk, in an office to whom the Prisoner handed his letter of resignation. Okay, he slammed the envelope down on the desk, along with his fist! And why was he angry? Well he had become disillusioned with the kind of work he was doing, fed up with clearing up other people's mess, as he was called upon to do, more often than not.
What Kind of A Doctor Is This Bloke?
Pictured here on his way, to taking the Prisoner for his medical after being attacked by the village guardian - the after effects can be most unpleasant!
But hang on a minute! After carrying out the Prisoner's medical, this doctor then feeds the medical information into a computer, and waits for the said computers diagnosis. 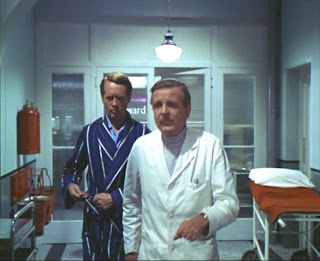 "There. You're absolutely fit."
What's inexplicable here, is the fact that this doctor can actually read a computer print-out card! Also that he needs a computer tin the first place to give such a diagnosis. That I suppose is a demonstration of what will be an ever growing reliance upon computers in our everyday lives. Plus the fact that he doesn't wear a numbered penny farthing badge!
BCNU
Posted by David Stimpson at 08:15