What follows are extracts from a transcript of an interview with actor Peter Howell who played the role of the Professor in the Prisoner episode The General. the interview was carried out on 1989.

Before the start of filming of the Prisoner Peter Howell and his wife made a visit to Portmeirion.

Peter Howell: Yes, it was, I suppose about five years before. My wife and I wanted a few days holiday and so we went up to Portmeirion. It so happened that the man who managed the hotel then was called Michael Trevor-Williams, who had been in the war with me in the same regiment, and I think that is why we chose to go there.
And we had a marvellous time, staying in the hotel. The food was just stunning, and we wandered about this bizarre village, and of course we saw a lot of the countryside - went up .
So I knew about Portmeirion, and I remember I was terribly disappointed when we made the episode. At first I thought it marvellous because they would need me to go up to Portmeirion, and I should be able to go back to the hotel. But not a bit of it! My double went up and that stuff on the beach is with my double, not with me. So I never got my second visit to this extraordinary place.
But I think one of the achievements of the series is the location. Portmeirion, because somehow the bizarreness of it.... you've got everything there, haven't you? You've got so much of what you need. It's slightly strange and other worldy, and also these great masses of beach you can use. It's a very good idea to use that. So that's my experience of Portmeirion - I haven't been back, alas.

When it comes to murder, they say the first person to find the body, is generally the person who committed the murder in the first place! 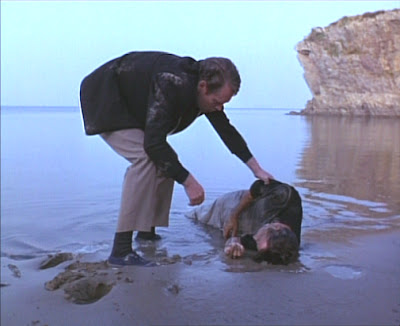 Well it was No.6 who found the body when he woke up on the beach that morning, but I don't think he was the one who did it. Sure No.6's first thought was to go through the dead man's pockets, otherwise he wouldn't have found the wallet, or the radio from which he might hear word from the outside world.
Later No.6 would use the cadaver for his own ends, to use it and send the outside world a message, to whoever may find it, that he was actually alive. No.2 would then have the body amended slightly so that it is No.6 who has died in an accident at sea! Very important this dead man has suddenly become, even if he wasn't very important alive.
But who was he? A citizen of the village of that there can be no doubt, the picture of the dead man together with a young woman, sitting together by the fountain pool in the Piazza proves that. But how had he acquired the radio, and for what purpose?
The radio message received by No.6 was obviously intended for the dead man, so could he have been a plant in the village? But that would still not account for the radio, unless there were two such plants in the village, the one in a position to gain the radio for the dead man. You will recall how No.12 in administration aided No.6 that time, in getting two security pass discs and "Top-hat" uniform for No.6 in The General.
Of course we may never know just who the dead man was. All we do know is, that he was a citizen of the village, that he knew a young woman there, so it might be a good idea to track her down might be a good idea. That he had a radio cannot be denied, nor the fact that he was out and about either very early that the morning, or like No.6, he defied the curfew and spent the night on the beach. How did the man die? Well I think he died a horrible death of suffocation, by the village guardian, past curfew time or not.

BcNu
Posted by David Stimpson at 08:02