The Prisoner - Yet Another Re-print! 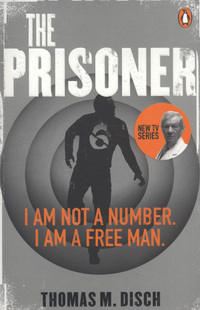 I was emailed yesterday by someone asking about this novel published in 2009 by Penguin Books ‘the prisoner’ byThomas M. Disch, and asking what it has to do with THEPRIS6NER-09 series.
absolutely nothing was my reply. This first published innAmerica, then here in by NEL {New English Library} in 1970. Since that time, this mediocre novel, based on the original series of 'the Prisoner,' has been reprinted several times, each with a different cover. It was also part of a three novel trilogy in the early 1990's 'the Prisoner' Omnibus, which I picked up for £1.99p from a bargain bookshop a couple of months after that Prisoner omnibus was published, becasue it simply didn't sell.
The only thing this novel has in common with the new series of THE PRIS6NER is the title, that and the picture of Ian Mckellen as Two on thr front cover. No doubt in an attempt to "cash in" on the new series!
What's more this really does irritate me, is the fact that publishers see fit to reprint this mediocre time and time agai, a novel which has never been a best seller. Yet I have a brilliant manuscript, a novel based closley on 'the Prisoner' which has been rejected time and time again by publishers, which would make an excellent TV series of film. But I am determined that I should succeed, and see the manuscript published.

Humour Is The Very Essence Of A Democratic Society
There is one particular humorous moment in ‘The Girl Who Was Death,’ which occurs when Mr. X is receiving his instructions via the Chief's voice on a record. Mr. X says "Thank you very much," to which the Chief's voice on the record says "What was that?" To which Mr. X relies "Nothing."
This is not the first time that this type of comic scene has been used. As it happens I like Will Hay films, and in the film ‘Old Bones of the River’ Will Hay plays Professor Benjamin Tibbets who goes to to open a series of schools in order to educate the African natives. On the voyage to Africa Professor Tibbets busies himself learning the language of the Ocura tribe, this he does by the use of a record, it is whilst he is repeating over and over, a phrase spoken by the voice on the record the voice says "That's good" to which Professor Tibbets says "Thank you very much" to which the voice on the record replies "Don't mention it."

Now I'm not saying that Patrick McGoohan, or script writer Terence Feely liked Will Hay films because I don’t know, or had even seen ‘Old Bones of the River,’ so perhaps this played no influence upon the scene in the record booth of the Magnum Record shop. But it’s a nice parallel to be drawn between the two.

Number 2 - Leo McKern
In 'Fall Out' a "late" Number 2 looked into the all seeing stainless steel eye and said "Look me in the eye, whoever you are, whatever you are." Well that's all fine and dandy, but which Eye? Previously during ‘The Chimes of Big Ben’ when Number 6 was busy in the woods hollowing out the hull of his boat. Number 2 remarked upon the home-made tools "Axe, stone chisels, even these are outside the pale of the law you know, technically speaking." To which Number 6 replied "I'm sure you can wink a blind surveillance eye." Yes, but which one?
Because Leo McKern actually has a glass eye. And by the look on Patrick McGoohan's face, I believe he's enjoying a private joke, poking a bit of fun at Leo McKern.

I'll be seeing you
Posted by David Stimpson at 08:25