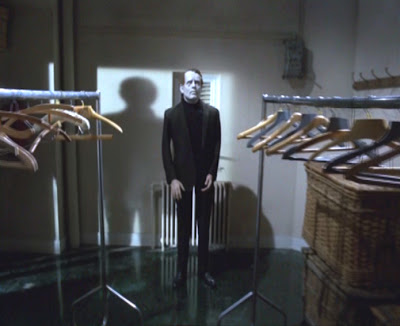 Quite recently a friend of mine and I have been discussing coat hangers. So why doesn't No.6's suit of clothes simply hang on a coat hanger? Why the elaborate need for a full-size mannequin of No.6., is it simply for dramatic effect? Although it might be for a psychological effect on the Prisoner, to look at himself at the far end of the cloakroom. I suppose in this way "they" faced No.6 with himself twice! And what about all those coat hangers? It could be that they represent all the other prisoners who have reached this point after having survived the "ultimate test," and their clothes may have hung on the coat hangers. On the other hand, it is also possible that the white robes and black and white masks worn by the delegates of the assembly hung on the coat hangers.
On another matter, have you watched carefully the film as No.6 puts a hand to his mannequin? 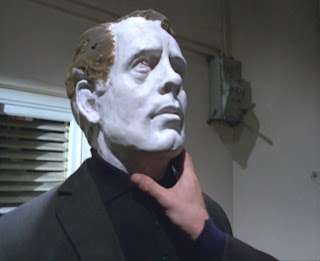 Just for a moment, and it is but for a moment, it's almost as though No.6 is about to take his mannequin by the throat, before what seems to be a change of mind and unbuttons the poloshirt instead. Is it possible that No.6 was so full of self-hate, that he was almost prepared to take it out on his mannequin? No, he saved it up for No.1 instead!

I'll be seeing you
Posted by David Stimpson at 08:54