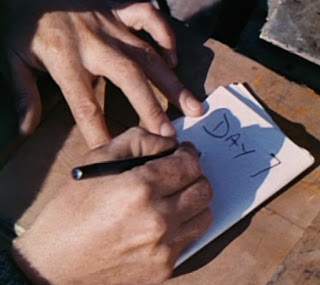 Well he's still out there having reached day seven, that's six days and six nights all alone at sea. He's a very resilient man our Number 6. We see here that he has been keeping a basic ships log of his voyage, the number of days, and his position at that time of day. I wonder how he knows his position without the use of a sextant? He'll know the time by his wrist watch, unless of course sea water gets into it, then it will stop!
I wonder how Number 6 is feeling this morning? Cold, wet, alone! He'll still be eating cold food out of tins, lets hope his drinking water lasts. He must he tired, perhaps approaching exhaustion. Here Number 6 almost fell asleep at the helm of his craft, 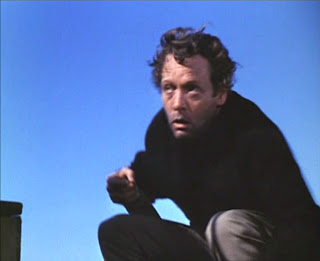 that will never do. So far Number 6 has experienced fair winds, but should a storm develop, then he'll be in real trouble. And still no safety line rigged, if he was to get swept overboard, separated from his raft, he'll drown! At best without warm dry clothing he'll die from hyperthermia and exposure! His clothes soaked with sea water will harden and stick to his skin. The Village Administration must have been mad to allow their prize prisoner Number 6 to be put through this ordeal, they could so easily lose Number 6! Such are the realities of the current situation.
And so it is that Number 6 must face yet another day all alone at sea, the way it has been for the past six days and nights. It would terrify me I know that, what about you? Mind you I forgot that Number 6 is made of sterner stuff, but then again he has to be!