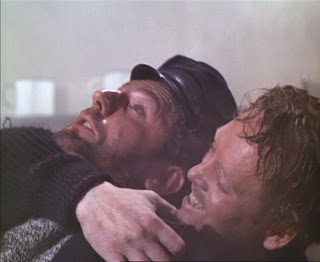 After surviving 25 days at sea, our intrepid hero No.6 finally lies unconscious aboard his raft. A motor cruiser draws up, and one man boards the raft. He takes anything he can find of value, and then having tipped the unconscious body of the man into the water, he boards the motor cruiser again and takes the helm. The twin diesel engines are revved. The icy cold water has revived No.6, and he boards the cruiser at the stern.
No.6 discovers a crate of guns in one of the cabins, he suspects them of being gun runners, possibly intending to deliver their illicit cargo to members of the IRA. In any case his continued survival means that he must take on the two supposed gun runners, and over power them. Life does not get any easier for No.6. His previous struggle was against the elements, now it's against his fellow man. 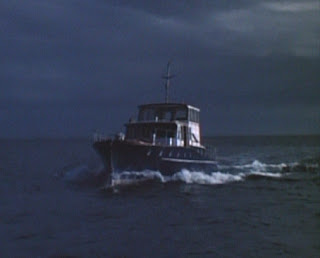 Having overpowered the two men, No.6 takes command of the motor cruiser, and seeing a light shining out in the blackness of the night, he steers a course straight for it.
There is a second struggle with the two crewmen as they manage to escape their bonds and the cabin they are locked in. A fight ensues, one of the crewmen takes a gun from a drawer in the wheelhouse, he goes on deck and fires at No.6 who hurls himself overboard and swims for his life!
I have never been too convinced that the two men are gun runners, it is only assumed from the crate of weapons No.6 finds. But I have wondered why No.6 did not avail himself of one of the said weapons, one of the sub-machine guns perhaps?
But what was No.6 doing opening that crate in the first place? It had got nothing to do with him. He might have simply have made himself known to the crew. But then No.6 is a suspicious man, and could not be sure. And so by having No.6 open that crate to find it filled with guns, it planted in the minds of the television viewers the idea that the two crewmen are gun runners. Instead of being agents working for the Village, who have been shadowing No.6 aboard his raft since the day he set sail from the Village 25 days ago. Only to approach No.6 in time of trouble, if his life should be in danger, which it was the moment he collapsed from exhuastion!
Tomorrow No.6 manages to return to London, but still life is a struggle!

I'll be seeing you
Posted by David Stimpson at 08:49