No.6 Serving The Community by our own reporter 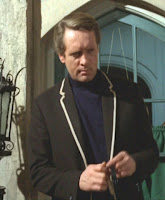 No.6 serving the community? Well some readers might find that difficult to believe, but its quite true. In 'Free For All' No.6 stood for public office. Being just the sort of candidate needed according to No.2, who himself enjoys a unanimous majority. He explains to No.6 that the good people don't appreciate the value of free elections. But doesn't everyone vote for a dictator? Because at the end the new No.2 gained his win with a unanimous majority!

Then there is the question of the General and Speedlearn, the compulsory education of the whole of the community via subliminal means. But the system is corrupt, as everyone knows the same thing, spouts their knowledge word for word, and learns when, but not what why or how and what's more its only history that the students are learning. No.6 steps in to find out what its all about, and after learning from a recorded message that Speedlearn is an abomination, that the General must be destroyed, No.6's course of action is set. And by his action, and that of his confederate No.12, he saves the citizens from becoming little more that a row of cabbages!
A sadistic, paranoid, monomaniac is brought to the village in the form of No.2. He hasn;t been in the village 5 minutes and already he questions the security of the community. He tells the citizens that they must be constantly on their guard against the enemies in their midst.He knows that there are those who believe that they can get away with their plots and conspiracies {he must be talking about Jammers!} and he sees those who do not report their suspicions as being traitors, and will be treated as such!  It was this sadistic No.2 who drove No.73 to committing suicide, so in avenging No.73's death, a woman No.6 didn't even meet, let alone know. He did the community a great service, and the Supervisor-No.28 has ultimately No.6 to thank for having his job back!
Appreciation Day, the day when the comminty shows its appreciation of those who govern us so wisely. Well here again No.6 comes to save the day on no less than 3 counts. In saving No.51 from being executed for the assassination of the retiring No.2. saving the life of the retiring No.2, and thirdly preventing mass reprisals against innocent citizens of the community.
And finally, although ordinary members of the community will never know, No.6 paid the community the biggest service of all. By ridding the community of No.1!
It is no wonder then that this man was brought to the village. He has already proved himself as being a tremendous asset to the community, and no doubt is destined for higher things. Possibly to eventually attain the position of No.1 himself.

Our own reporter
Photograph from The Department of Visual records.
Posted by David Stimpson at 07:52