The Prisoner - Success or Failure?

Well financially the series was a flop. The production company Everyman Films, owned by Patrick McGoohan, David Tomblin, and another individual who's name eludes me for the moment, went into bankruptcy, and led the Inland Revenue a merry dance, according to rumour.
Artistically the Prisoner was a failure at the time, the general public were not ready for such a surreal series which was ahead of its time, and even the social comment of its day went over the head of the average viewer. Yet time is a great educator and over the decades people living in many countries around the world have come to appreciate the series and has become a resounding success, perspicacious, stimulating, annoying, and yes entertaining. But the Prisoner has taken time to achieve this success, yet there are people who cannot see the point, and are still dead-set against it today. Probably because they have the same problem as others before them. They have not tried to make any sense of the Prisoner, because they can't or its too much trouble to try!
Yet through the decades each new generation have found the Prisoner either in Video or form on shelves in stores on the high street. Have bought said Video's or 's and have become firm fans of the series. Well if new fans had not come to the series appreciation for the Prisoner might very well die out, as the original fans of the series, those who formed Six of One: The Prisoner Appreciation Society back on January 6th 1977 are now either in their late 50's or early 60's years of age, a sobering thought for those of their kind.
The Prisoner was never intended as after dinner fodder, and perhaps that is why it lost the race. Over the decades we have learned differently. Failure or success? Well failure can be instant. Success takes a little longer, and I'm pleased to say that appreciation for the series is still alive and kicking today.

Joff Summerfield, on peddled his homemade replica of a Victorian Penny Farthing bicycle into Greenwich Market, south-east , where his journey began two-and-a-half years ago, and 22,000 miles earlier.
Mr. Summerfield, 40, visited 23 countries in four continents after setting off from 0 degrees longitude at the Greenwich Observatory. He averaged a speed of 11mph and covered up to 40 miles a day as he cycled across into before riding through and . In , he raced in the Penny Farthing World Championships and came second in one of the 'novice' categories.
From , where he cycled without the correct permits, he managed to sneak across the border into despite his bike's giant front wheel which is 1.2 metres in diameter.
En route he took in landmarks including the Taj Mahal. The great Wall of China, 's complex and the . 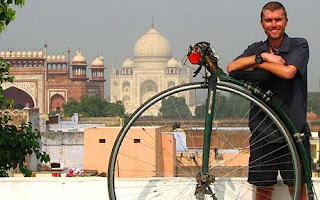 His bike had just one fixed gear, a hard leather saddle, a small brake and solid rubber tyres with no modern technology to make peddling easier. Cycling alone with water bottles strapped to his handlebars and with no back up, he travelled light with just a change of clothes, stove, tent and sleeping bag and survived on £5 a day.
But Joff Summerfield is not the first person the have cycled his way around the world. That honour goes to Thomas Stevens, who was British, in 1887.
Nadia-No.8 was of course is a plant within the village, and her remit is to get close to No.6, but not to make it obvious. To feed him the idea that she knows the location of the village, that she saw a secret file on the village once, and for a very short time. hen to escape with No.6. And Nadia proved to be very good at her job, but I suspect nothing could have prepared her for her first encounter with the Village Guardian!


She must have been briefed about the village guardian, so it was a very brave woman who went for that swim one morning, knowing full well what was about to happen. But as I say, nothing would really have prepared her for the actual encounter. Frightening and very unpleasant for her.