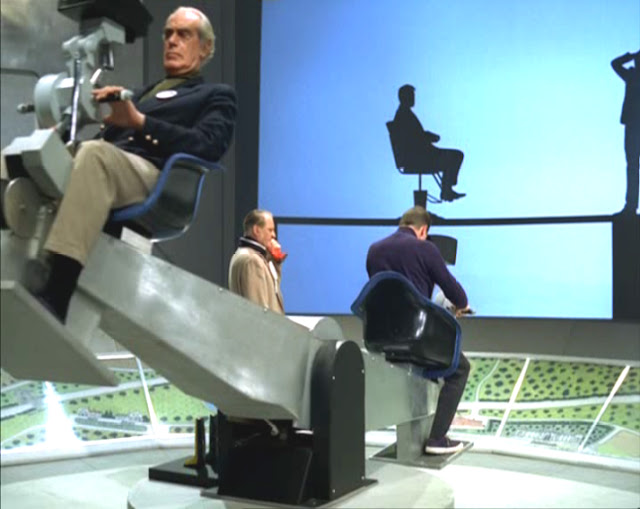 It might be said of 'Free For All' that the Control Room lacks a Supervisor, seeing as how No.2 spends his time there during the Truth test. I know that the Supervisor-No.26 {Peter Swanwick} appears in the episode, but that's simply reused film footage taken from 'Arrival.'
So why no Supervisor? Well as it happens I believe there is a Supervisor, only he appears to be filling in as an Observer sitting on the See-saw, in the top left hand corner of the picture {Kenneth Benda who is actually credited as being the Supervisor}. You will recall how No.2 mentions the Labour Exchange Manager's technique and asks where he got it? The Supervisor replies "From the Civil Service, adapted it immediately." So why the break in continuity, by using footage of Peter Swanwick as the Supervisor, when they could have maintained Supervisor continuity by having Kenneth Benda say something about the Village Guardian like "Now approaching," instead of using a few seconds of film of the Supervisor from 'Arrival!'