The Girl Who Was Death - Un-Shot! 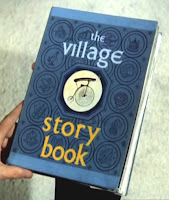 It must be quite obvious to the casual observer of television series, that during the writing of any such script, changes do from time to time occur, and it is no different with episodes of the Prisoner. For example; The Girl Who Was Death, some three and a half pages, of an entirely self-contained scene were scrapped, from the original script to what we actually see during the episode. at the point where in the boxing ring Killer Kaminski who instructed Mr. X to go to the tunnel of love, originally Mr. X was instructed to go to a replica of Hampton Court Maze. Mr. X quickly finds the maze in question and the following bizarre sequence unfolds.
Mr. X meets a portly, jovial showman wearing a bowler hat standing at the entrance to the maze, mumbling something quite incoherent and then laughing to himself. Mr. X enters the maze which looks
innocent enough, but he is not prepared for what he is to encounter around the next corner.

The maze has suddenly been replaced by a tropical rainforest, the air filled with exotic screeches and bird song. It is not long before Mr. X is attacked by New Guinean head hunter brandishing a machete. But Mr. X makes short work of the native, disarming him of the machete in the process.
Continuing his exploration of the rainforest he is stopped dead in  his tracks by the roar of a lion, which turns out to be a Tabby cat. Now deeper into the rainforest Mr. X is instructed by a passing Parrot to turn thirty degree left. With nothing to lose Mr. X follows the parrots instructions only to find himself back in the maze!
Mr. X continues to tread carefully paying little attention to the gardener spraying insecticide onto the mazes well tendered hedges. As Mr. X draws closer the gardener, dressed in grey overalls with two metal canisters strapped on his back, the one labelled Insecticide, the other Homicide! The tried to spray Mr. X, but using the machete he took from the native in the rainforest, he knocks his assailant to the grounded piercing one of the pressurised tanks strapped to the gardeners back, sends him shooting off into the distance like a rocket!
After regaining his composure Mr. X next encounters someone standing over him, a figure of some 12 feet tall, it is in fact a man with the painted face of a clown, wearing top hat and tails, on stilts, and armed with a sub-machine gun! Mr. X picks himself up and a Chase ensues through the maze, as he ducks and dives to escape the hail of bullets fired from the sub-machine gun, as the stilted walker uses his elevated height to trap his quarry. Before long Mr. X stumbles into the centre of the maze where he finds suitable cover to hide from his pursuer. Unable to locate Mr. X he is unaware of hat is happening to his feet, Mr. X is tying his shoe laces together, causing the stilt walker to come tumbling to the ground.
Now desperate to leave the maze, Mr. X hacks his way through the hedge using the machete, and finds himself back in the fairground where he is told off by a disapproving mother. The little boy she has in tow is holding a balloon on which a message directs Mr. X to the tunnel of love. The balloon explodes.... BANG!