Why should No.2 in 'Dance of the Dead' think that No.6 would have a bomb to put in the hospital? She may well have been simply teasing, ﻿when she told the doctor-No.40 that she would warn him if No.6 was gong to put a bomb in his lovely hospital. Where did No.2 think No.6 would get a bomb? Perhaps from those dissidents mentioned by No.12 when he was interrogating No.6 in the Boardroom in during the episode of 'The General.' 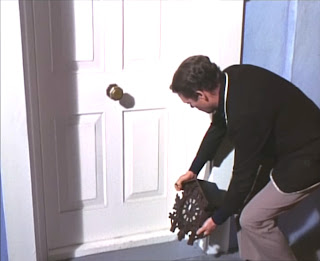 Is this an assassination attempt on No.2? Certainly No.2 thought it was a bomb, in fact he was convinced it was. But it wasn't, it was simply No.6 carrying out an act of "Jamming." In that the assassination plot against No.2, was simply make believe! 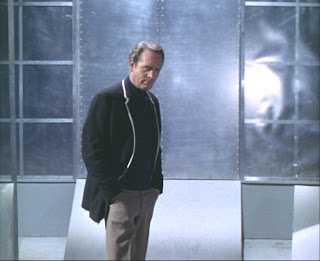 ﻿   But even if it had been a bomb planted at the door of the Green Done, surely any damage would have been superficial to the building. No.2 would have been safe behind what I see as the pair of blast proof doors of his office.

BcNu
Posted by David Stimpson at 08:18