The Meeting Of Two Selves by our own reporter 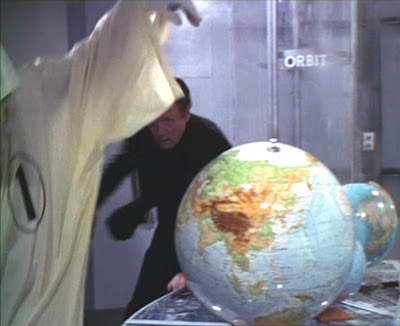 Myself and himself you might call them, or the on the other hand the one alter ego of the other. Certainly this meeting has been seen as too much for No.6 to bear, in finding out that he is in fact No.1, and has been so all along. How he then goes berserk, chasing No.1 round the control room, then launching the rocket in order to destroy his alter ego and the village into the bargain.

Yet is that scene really like that? Is not No.6, who is unemotional, cold and calculating as he reveals No.1 to be himself! As he then proceeds to chase No.1, who he finally seals in the nose cone, before setting the countdown for the launch of the rocket. As for the destruction of his alter ego - No.1. Well yes I have to go along with that. But No.6 might not be quite the man he was without his alter ego. Perhaps he'll find himself more quiet and sedate in the future, unable to make the difficult decisions he once did, the hard and difficult decisions which his alter ego made for him on more than one occasion.
Judging by the evidence of the scene itself, I would say it is not No.6 who goes berserk, but No.1! No.1 who has been confronted by his alter ego, who cannot face the truth of the matter. That he has been the Prisoner-No.6 all along.
Faced with this truth, No.1 starts running about the control room, laughing maniacally, as he desperately trying to evade his other self, which he finally does by climbing the steel ladder up into the nose cone of the rocket. Giving one final, defiant maniacal laugh as he drops the hatch on his adversary. 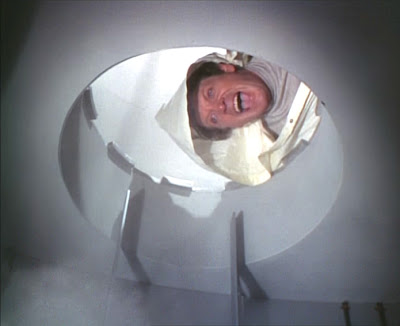 Your own reporter
Photographs from the Department of Visual Records.
Posted by David Stimpson at 08:02