Wychwood Our Own Reporter Investigates 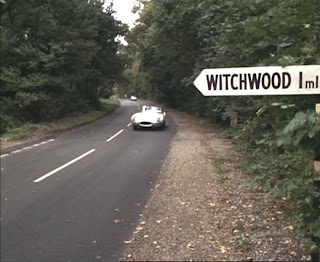 Why Wychwood? Well basically because whoever it was in "properties" during the production of the Girl Who Was Death, who had this sign made up, because it is a made up sign and not at all real. Misspealt the name of Wychwood, of which there are plenty up and down the counties of .

Wychwood, is a deserted Village, taken over by the girl as a "killing ground." Once it was  a thriving community, with a family Butcher - Brendan Bull. A Baker - David Dough, and a Candlestick maker by the name of Leonard Snuffit.
It was most pleasant sitting on the roadside eating my spam sandwiches, a fruit pie, both washed down with a small bottle of beer. But now back to my investigation.
The in the , was abandoned some years ago, after talk of a by-pass which has yet to be built, which was to go right through the heart of the village. Indeed in the building of the Blacksmiths there is a bulldozer to be used in the demolition of Wychwood. Something I fear will not prove to be a hard task, as some of the buildings are being supported by huge buttresses. Whilst others have temporary fencing around them in order to keep people out and safe from falling masonry.
The deserted village of Wychwood actually features twice within two episodes of the Prisoner, ‘The Girl Who Was Death’ of course, but previously in ‘A B and C’ one street of Wychwood doubles for an avenue somewhere in Paris, where No.6 encounters a man of mystery, who prefers to maintain his anonymity as it is always the best disguise for really important people.
Wychwood is quite like any other village, it even has a bell tower with a green dome. In the past when the bell has been tolled in Wychwood it is not to sound curfew, but is the death knell. The death knell was sounded when a great man of this village was dying. And that is what was supposed to have happened to Mr. X, although he is a born survivor as we are all witness to. So in Mr. X's case the sounding of the death knells is premature!

our own reporter
Photograph from the Department of Visual Records
Posted by David Stimpson at 07:37