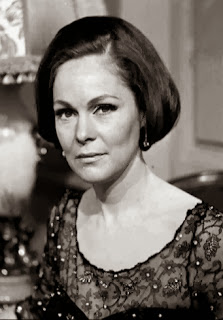 You wouldn't think to look at her now, that Janet Portland, daughter of Sir Charles Portland was once a debutante, 1955 being the year of your coming out, your debut in fact.

“Nothing Miss Portland., nothing at all. Now here you are, a middle aged woman, and engaged I believe.”
“Yes, to a wonderful man.”
“Where is he now?”
“Away somewhere there.”
“Not here?
“No. Working for my father he is often away for long periods, sometimes a month or more possibly. It’s been a year this time.
“And your father Miss Portland, he wasn't surprised by your engagement?”
“No, why should he be. He is very happy for me.”
“And himself I should think!”
“What are you trying to imply?”
“Again nothing Miss Portland. Just that he's losing a daughter and gaining a son-in-law. I can see the headline now, "1950'S DEBUTANTE MARRIES SECRET AGENT", one for the society pages that one.”
“How did you know?”
“We have our sources Miss Portland. Did you know your fiancée had resigned his job?”
Janet Portland looked stunned.
“No, I can see you didn't.”
“He wouldn't, why would he? My father would have said.....”
“No doubt he was a disappointed man.”
“Who?”
Your father. After all he'd just lost a son-in-law!”
“Was he going to take you with him - no I suppose not seeing as how he hadn't told you of his intentions.”

There was a painful look on Janet Portland’s face as I left her sitting in the drawing room that day. Mind you she never was 'his' type, Nadia was far more 'his' type I would have thought. And all that "World Travel," I should think Miss Portland would have wanted that to stop. Although t don't suppose there's much danger lurking behind filing cabinets, or in the typing pool! I don't suppose a man like John Drake would find it easy to settle down to a desk job. Perhaps that's why he resigned himself to doing a runner before they came for him, well he wasn't taking her with him, was he? I can see the headline now "SECRET AGENT RUNS OUT ON SOCIALITE!" another one for the society page!