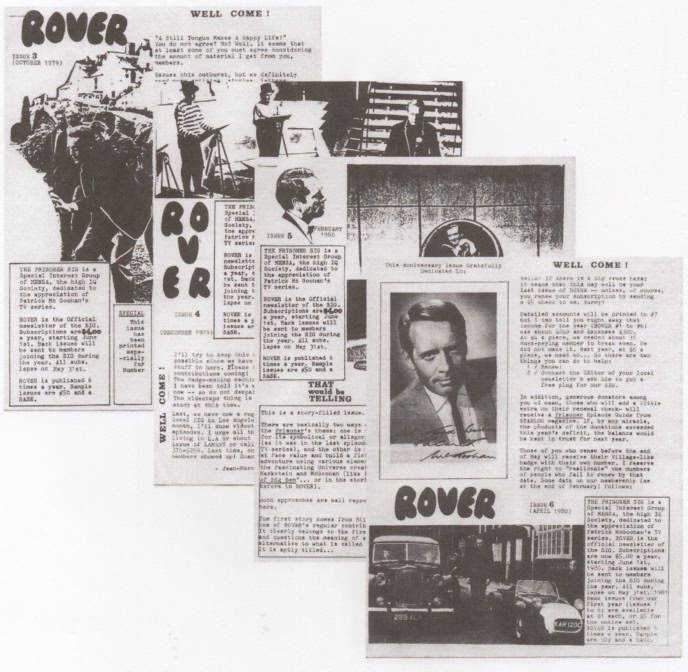 Recently I was lucky enough to successfully bid for these four issues of ROVER a fanzine for 'the Prisoner' dated 1979-1980. Each are four pages in number, and are quite naive, yet having said that, there is a keenness about them. They are of their time, and the editor is enthusiastic for both the fanzine he is producing and 'the Prisoner.' And let us not forget, that such fanzines as this were at the forefront of appreciation for 'the Prisoner.' ROVER was produced in America by Jean-Marc Lofficier, and was one of the longest running fanzines of it's time.
ROVER contains letters from subscribers of the fanzine, articles, quizzes, an excerpt from the interview between Patrick McGoohan and Warner Troyer. The question "Why Six" is asked, why was that number chosen for the Prisoner, and what does that number mean? And what was the conclusion, well maybe it was simply Patrick McGoohan's favourite number!
Rover the Village Guardian is discussed by a number of subscribers. And there are a number of short stories, one as I can only best describe as 'Doctor Who Meets the Prisoner.' And 'The Acid Test,' when John Steed and Mrs Peel of 'The Avengers' are in the Village. In fact when I saw this, but before I had actually read the story, it put me in mind of a conspiracy theory which was bandied about at one time. The theory was, that the Prisoner was in fact Mrs Peel's husband! This came about because at about the time of the Prisoner's resignation and subsequent abduction to the Village, Mrs Peels husband also disappeared. It was not known where Mrs Peel's husband was, yet strangely enough around the same time as 'Fall Out' and the Prisoner's return to London, Mrs Peel's husband also returned! But the story in ROVER has nothing to do with that.
I am always interested in such publications, and collect them when I can. Although such 'Prisoner' fanzines are extremely rare Rover lasted in excess of 6 issues, but unfortunately many others did not last for more than one or two issues, that is what makes them so very rare, and excellent items for my archive.
Today any information required on the subject of 'the Prisoner,' is but a few clicks of the mouse away. Or there are forums one can join to discuss 'the Prisoner' with others. But for those reading this who are not old enough to know, such fanzines, newsletters as these were a vital part of people's appreciation for 'the Prisoner' at a time long before the advent of the Internet as we know it today. They were fans only outlet where they could express their ideas, theories, about 'the Prisoner' to other readers. It was also the first way of networking, in bringing fans of 'the Prisoner' together, putting them in contact with each other.


Be seeing you
Posted by David Stimpson at 08:56