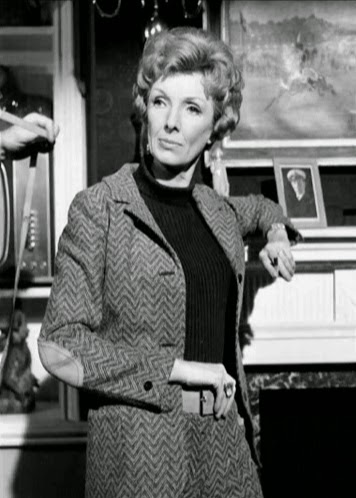 You can see the late Mister Butterworth once of the Royal Navy, in the photograph on the mantelpiece at Mrs. Butterworth's left elbow. But what’s that? It looks as though the Prisoner is having a quick measure up, to see if the measurements check out with the size of room he once knew! Obviously it’s not enough for him to simply remember the damp patch behind the bureau, which was made good about twelve months ago. Along with the opening of the bathroom door which slides to the left, not to mention the hot and cold taps of the shower, which had been put on the wrong way round. But to take measurements of the study, well that’s a bit extreme I should have thought! And judging by the expression on Mrs. Butterworth’s face, she seems very put out about! But that’s the Prisoner for you, give him an inch and he’ll take a foot!