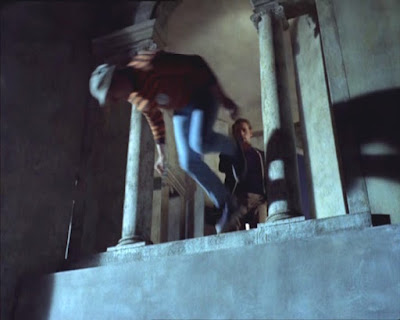 ‘Checkmate’ sees a daring escape plan put into operation. Part of that plan sees the searchlight crew in the tower attacked by Number 6 and his confederates. One of the crew is punched from the tower by Number 6, and lands with a splash of water. Yet there isn't any such water anywhere around the base of the Bell Tower. However anyone watching ‘Checkmate’ who had not been to Portmeirion would not know that! And yet does know it from watching ‘Arrival,’ and an earlier scene in ‘Checkmate, when the Rook is being pursued by Number 6.