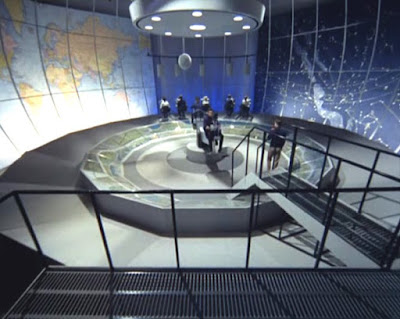 Two solid steel doors lead the way into the Control Room, and once over the threshold you find yourself standing on a steel gantry. A steel walkway and steps lead down onto the floor. In the centre of which is a steel See-Saw device, on the either end of which sits two Observers looking through their monitors. It’s a surreal device, the up and down, round and round motion might be enough to help extend the Observers twenty minutes attention duration.
Quite naturally there is a map of The Village, which winds itself around the 16 sided Hexadecagon, within a larger Hexadecagon. The wall of the spherical chamber is adorned with a map of the World, and a celestial chart. The reason for these is unclear, unless the World map is used to indicate where agents working for The Village are operating, as well as displaying Village exports operating in every corner of the globe! The reason for the astral chart is less clear. However in bygone times, it was usual to have a terrestrial and a celestial globe as a pair. That could account for both terrestrial and celestial map and chart adorning the chamber wall. There is also a large electronic wall screen fitted into the wall, through which the Supervisor can see every part of The Village via both external and internal surveillance cameras, covering both the woodland and beach, with a range out to sea of three miles.
Lighting is provided by lights in a circular steel ceiling fitting, from which is suspended a stainless steel electronic eye, which orbits the Control Room. A case of the Observers being the observed……by Number 1 presumably. Seeing as the same type of electronic eye in set in the hull of the red 1 rocket. Also there are five light fittings suspended from the ceiling of the chamber, one above each of the five Observers. Number 2 once stated that the Observers do see and hear everything. When considering the number of citizens and citzenesses in The Village, against the number of 7 observers, that statement seems highly unlikely!
The Control Room looks void of any control panels. These are brought in when required, such as a control panel for the wall screen, also for radar and sonar capability. Also for the activation of The Village electronic defence Beam, as well as for the release of the Guardian from its containment area somewhere on the seabed.
Finally on the floor of the Control room, within the Hexadecagon, is the same circle design as seen on the floor in Number 2’s office. The design of an eye! The communications system is via four different cordless telephones, yellow, turquoise, grey, and yellow, these sit on the base of the See-Saw device.