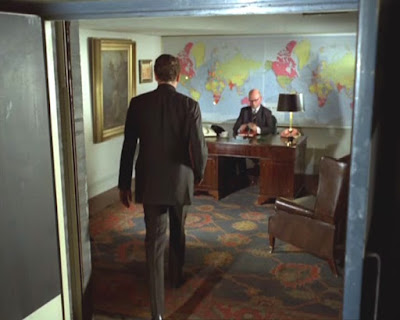 It is supposed that the outer office where ZM73 hands in his letter of resignation, is thouyght to be located somewhere along that dark tunnel of the underground car park. And yet the office could be anywhere. After all the Houses of Parliament is just a stone’s throw away from that car park, and Whitehall is but a few steps away from Parliament Square.
On the occasion when ZM73 goes to the office in order to hand in his letter of resignation, there are two World maps on the far wall. The one on the left fitted with lights, in Australia, South Africa, the Sudan, three in Eastern Europe, Argentina, and America, oh and one in Britain. There is a large painting on the left wall, and a smaller one. The floor covered with a carpet. There’s a leather winged armchair to the right. The bureaucrat sits at an oak desk with walnut inlay. On the desk a table lamp, two telephones, one pink, the other white. A closed leather bound book is set on the desk. There is a cup and saucer, with a tea plate, a desk blotter, a pen holder, and stationary holder.
And the room remains much the same upon ZM73’s second visit to the office. There is no leather bound book, but an open file {or is it a script for an episode of the Prisoner?!}. There is a cup and saucer, but no tea plate, perhaps the lack of biscuits is down to cutbacks within the Civil Service!
By the time of ZM73’s third visit to this office, there have been a few changes made, not only to the office, but also to the personnel. The bald-headed, bespectacled man has gone. In his place Jonathon Peregrine Danvers. As for the office itself, there’s a coat and hat rack to the left of the doors from the desk. The leather winged armchair has been removed, replaced by a plain hall chair. Two paintings hang upon the wall, one a street scene, the other looks to be a ballet painting, although it is clearly difficult to say. And yet the picture looks more like a photograph because it doesn’t fit the picture frame properly.
The desk is the same, only now the top is covered by a large light blue cloth. The table lamp has been moved from the right of the desk to the left. The two telephones, white and pink, have been replaced by a blue one, and a black and white one. There are now two types of desk blotter, the flat one, and a roller blotter. There’s the stationary box, and a pen box, and a black leather bound note pad with gold trim. There is also a plain white cup and saucer, and again no tea plate, so no biscuits. Also on the desk, as well as the addition of an intercom, there is an alarm button fixed to the desk. Perhaps this addition was brought about after the behaviour of ZM73 when he handed in his resignation, that the bureaucrat felt threatened. And possibly also during ZM73’s return to that office when he asked “Anyone at home?” Meaning is anyone in the office. Because after ZM73 spoke those words we do not know what happened. Perhaps ZM73 flew into another of his rages. We know he did against Danvers, grabbing the man by the lapels of his jacket demanding to see Sir Charles Portland.
But what’s this, there seems to be something not quite right with the next photograph. It could be described as a caught on camera moment! 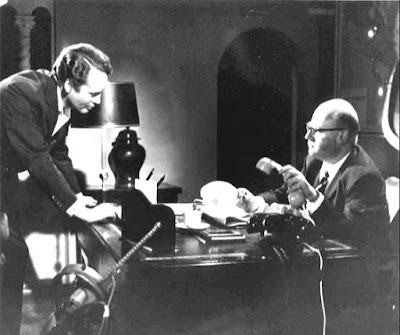 Above is a production photograph from ‘Many Happy Returns’ taken at the moment ZM73 asks if there’s anyone at home? But what’s that archway in the wall doing there? It wasn’t there before! Also there’s a window with the spiralled column behind ZM73’s shoulder. Just a minute, if the same photograph is “mirrored”………….. 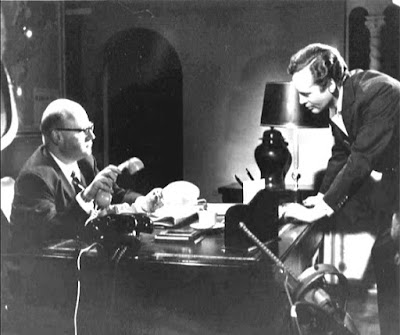 That’s much better! Now we now can see exactly where we are……. not in a room somewhere at the end of a long dark passageway, as in the opening sequence of ‘the Prisoner.’ But actually on the set of Number 6’s cottage in The Village! The only things missing structurally are the door to the cottage, and the short wall which should be next to the door. As seen in the next picture taken from ‘Dance of The Dead,’ just in case you had any doubts. 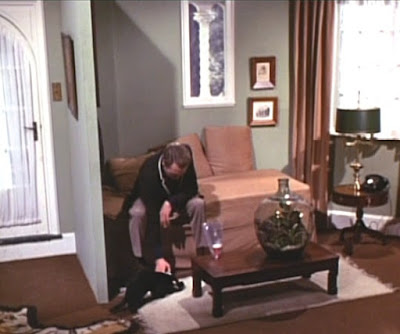 There’s the door in the archway, there’s the window, and the wall in between! It just goes to show that ‘the Prisoner,’ even after 48 years, still has the power to throw up interesting surprises!