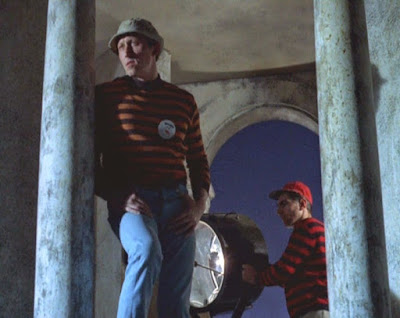 “You know what Two-five-three, I’ve been thinking.”
“Thinking, what about Two-three-five?”
“About our position.”
“Oh I don’t think it’s too bad. Things could be worse.”
“How could they be worse?”
“Didn’t you hear what they did to Number Fifty-Three.”
“No.”
“They used him as a lab rat in some experiment!”
“I was actually thinking how dangerous it is, being perched up at the top of this tower.”
“I hadn’t thought about it!”
“Well you should. One false step and it’s a ninety foot drop.”
“More like a hundred foot drop or more I’d say.”
“Well there you go then. Do you know, I think we do the most dangerous job in The Village.”
“Do you think so?”
“Well don’t you? It’s a bit precarious perched up here. What happens if someone takes it into their heads to attack us?”
“Who would do a thing like that?”
“Desperate violent men, that’s who. And there’s only one way down!”
“Two if were not careful.”
“I’ve a mind to put in for danger money……….what was that?”
“What was what?”
“Sounded like a step on the stair………”