The Coliseum Cinema At Porthmadog 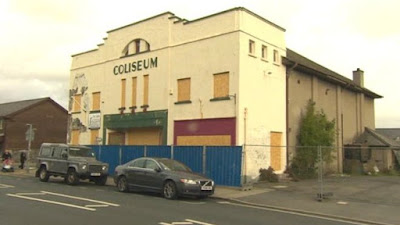 This I read last night on the BBC television text service.
“Plans to demolish an art deco cinema in Porthmadog have been given the go-ahead. Despite 300 objections.
Gwynedd Council voted to demolish Pothmadog’s Coliseum, which developers said was in a poor state, to allow the site to be renovated.
Councillors also urged applicants to consider further discussion with the community first.
More that 300 people objected to the proposals, with some saying it should be given listed building protection.”

The Coliseum cinema in Portmadog has a place in the history of ‘the Prisoner,’ as it was there that the daily film rushes of the filming of scenes at Portmeirion, were screened for the Production crew in both September 1966, and again for a second shoot in March 1967.
The Coliseum cinema was opened in 1931, and Bob Piercy had been the projectionist there since 1939, and it was Bob who was projectionist for the screening of ‘the Prisoner’ film rushes each night.
Bob recalled how the production crew would sit in front and watch all the filming of the day before. The day before, because the film had to be sent to London for processing, and then sent back from London for the film to be screened. There was no sound, just vision only. Each day's filming was usually about five to eight minutes long, but would be screened over and over again, and take between fifteen minutes to two hours. Starting at ten pm and wouldn't finish until around midnight. Patrick McGoohan would sometimes nip out to the pub, and would bring little Angelo Muscat into the Projection Room, leaving him here sitting on a stool looking at the film through a hole in the wall!
It was Clough Williams-Ellis who organised a screening of ‘Arrival,’ the very first preview of the episode. Clough sent out invitations to all his friends and important dignitaries, High Sheriffs, even the Chief Constable of Caernarfon, and Director/Producer David Tomblin also attended. Clough had sent for a 35mm print of the film, which was the only print in existence at that time, so extreme care had to be taken of it, being the only copy. The preview took place on a Sunday evening, even though the cinema had no license for seven days, and they were not allowed to show films on a Sunday. But the event went ahead anyway, and was a great success, and that was the first screening of ‘the Prisoner’ anywhere, a world premier in fact at the Coliseum cinema in Porthmadog albeit it a silent one!
It was during the late 1980's into the mid 1990's that Bob Piercey would again act as projectionist for ‘the Prisoner’ at the Coliseum, when screenings of two episodes from the serieds had been organised as part of ‘the Prisoner’ conventions held at Portmeirion.
Be seeing you
Posted by David Stimpson at 08:30