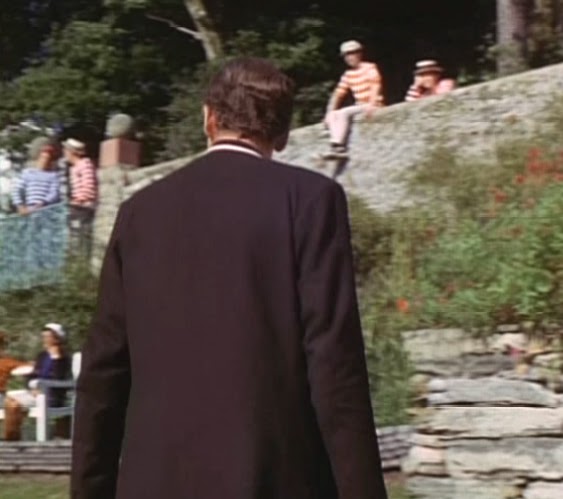 PMcG “What are you doing up there?”
“Who us?”
“Yes.”
“Just for a moment I thought he meant us!”
“I’ll get to you two in a minute. So what are you two doing?”
“We were told to stand here and dress the scene.”
“Who told you that?”
“The bloke in charge.”
“I’m the bloke, I mean I’m in charge here.”
“Well it was Don Chaffey who told us to stand here.”
“That’s alright then. But try and look interested, don’t just slouch on the wall like that. And why are you sitting on the wall when you were told to stand there?”

“Well I thought it would give variation to the scene.”
“Well alright then. What have you two to say for yourselves.”
“I knew it would be our turn soon. Me and my mate here were told to do the same as those two. And here we are doing it.”
“But you were talking.”
“That’s right. Well we thought it would add something to the scene, if we were to be seen talking. Like we were discussing the chess match.”
“Well alright then, but keep it down. Are either of you two called Fred?”
“No, I’m Stan, and he’s Tommy.”
“What about you two?”
“I’m Frederick, and I’m Brad, short for Bradley.”
“I don’t care what it’s short for. Do any of you know who Fred is?”
“No why?”
“Because someone ruined a shoot by calling if Fred was alright up there!”
“You alright there Fred?”
“You mean like that?”
“Yes, who the F**K shouted that out?”
“I wouldn’t want to be in Fred’s shoes when McGoohan gets his hands on him!”
“Fred’s alright. It’s the bloke who shouted out Fred’s name who’s in trouble!”
“I’m getting ready for me’ lunch!”
“Oh look, we’re going for another take, look interested.”
“And don’t you fall off the wall.”
“Are you alright up there Fred?”
“Yeah.”
“Well don’t fall off that wall, you’ll ruin the take!”
“Righto!”