‘The Prisoner’ was never devised as being a children’s television series, and yet in the past 50 years ‘the Prisoner’ has attracted thousands of children. So perhaps the series is better viewed through the eyes and mind of a child. I was once told by someone, that after watching ‘the Prisoner’ with her son, and after meeting other people who had seen ‘the Prisoner,’ she couldn’t understand what their problem was. Why they couldn’t understand the series, why they were looking for explanations, not to mention those so termed “hidden meanings.” She thought the reason why children get on so well with ‘the Prisoner,’ was that they do not expect to understand every detail, that they merely follow the story. She firmly believes that she was helped by watching ‘the Prisoner’ through her child’s eyes.

What the meaning of ‘Pop Goes The Weasel is this. Weasel is derived from Cockney Rhyming slang, "weasel and stoat" meaning coat. In bygone days it was traditional for even poor people to own a suit, which they wore as their 'Sunday Best'. However when times were hard people would pawn their suit or coat on a Monday, and then claim it back from the Pawn Brokers before the following Sunday. Hence the phrase “Pop Goes The Weasel.”
And what of Little Bo-Peep?
In ‘Dance of The Dead,’ Number 240, an Observer, attends the Carnival Ball in fancy dress costume as Little Bo Peep who Number 2 finds quite enchanting, but of whom Number 6 says “Who always knows where to find her sheep!” 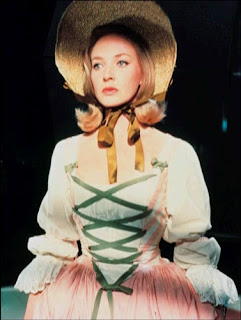 “Little Bo Peep has lost her sheep
And doesn’t know where to find them.
Leave them alone and they’ll come home,
Bringing their tails behind them.

Little Bo Peep fell fast asleep
And dreamt she heard them bleating,
But when she woke, she found it a joke,
For they were all still fleeting.

Then she took her little crook
Determined for to find them.
She found them indeed, but it made her heart bleed,
For they left their tails behind them.

It happened one day, as Bo Peep did stray
Into meadow hard by,
There she espied their tails side by side, all hung on a tree to dry.

She heaved a sigh, and wiped her eye, and over the hillocks went rambling,
She tried what she could,
As a shepherdess should,
To tack again each to its lambkin.”

It is interesting that the name Little Bo Peep should be derived from the derivative of the words ‘bleat and sheep.’ Also the words of ‘Little Bo Peep’ contain words that are almost a forgotten part of the English language, such as espied, hillocks, lambkin.
And the moral of this nursery rhyme, is that one must take responsibility for falling asleep when you should be awake, or face the consequences.
The earliest record of this nursery rhyme is or around 1805, but the manuscript only contains the first verse.