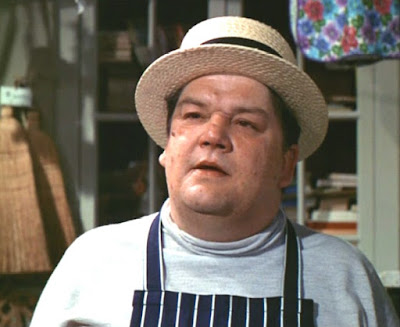 Ting-a-ling-ling sounds the shop bell.
The shopkeeper is conversing with a customer in some incomprehensible language. But when he sees me she suddenly stops and begins speaking to the customer in English.
“Would you help yourself to a hand of bananas madam.”
“A woman wearing slacks and a green jersey turns and selects a hand of bananas. The shopkeeper weighs them and places then on top of the woman’s wicker basket. He then clips her credit card and slips that also into the basket.
“Be seeing you” the shopkeeper salutes as his customer leaves the shop.
Ting-a-ling-a-ling sounds the shop bell.
“Good morning sir. What can I do for you then?”
Approaching the counter I asked for a map of the area.
“Don’t they all sir!”
“Do they all what?”
“Want a map of the area, not surprising when you come to think about it. Have you been to the café?”
“Yes, it was just opening.”
“They offered you breakfast?”
“Yes. I wanted to make a telephone call, but the telephone had no number!”
“They don’t! And so you tried the taxis.”
“How did you know that?”
“And finding yourself back where you started, you’ve come to buy a map of the area.”
“Yes.”
“Colour or black and white?”
“It doesn’t matter, just a map.”
The shopkeeper turned to a cabinet behind him. Opening it he searched through its contents, then closing the cabinet he turned and dropped a cardboard bound Map of Your Village onto the counter.
I looked at it for a moment before unfolding the map. In black and white I studied The Village, the mountains, and the sea.
“Something wrong sir?”
“I meant a larger map.”
“Don’t they always, but only in colour, much more expensive.”
“That’s okay.”
The shopkeeper returned to the cabinet from which he produced a leather effect bound Map of Your Village and dropped it onto the counter. I unfolded the map the layout was identical to the other one in black and white, only bigger!
“That’s not what I meant, I meant……….”
“You meant a larger area, no we only have local maps sir, there’s no demand for any others. You’re new here aren’t you?”
“Where can I get a hire car, self-drive?”
“No self-drive, only taxis, but you’ve tried those!”
“I could always steal a taxi!”
“What self-drive a taxi, that won’t get you very far!”
Ting-a-ling-a-ling sounds the shop bell.
The shopkeeper goes to attend to his next customer, and I go to leave the shop.
“Don’t you want to buy a map then? Never mind, I look forward to the pleasure of your custom sir, be seeing you.”
I paused at the shop door
Ting-a-ling-a-ling
“Yes sir, and what can I do for you?”
It’s nearly always the same with new arrivals. Never mind, they soon learn the little ways of The Village!