A Favourite Scene In The General 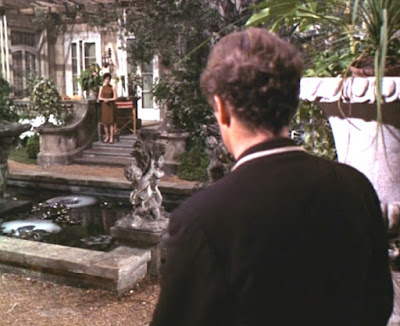 Madam Professor is now a widow, the Professor electrocuted to death by the General. Now she will be forced to live out the remainder of her days in The Village, most likely living in not such a large and elegant house, but a small cottage for one. And perhaps so to occupy her time, she will be allowed to carry on with her art seminars. But for the moment she grieves for the loss of her husband, and is all alone in a Village she barely knows.
Towards the end of the episode Number 6 pays a call on the grieving widow, and for a few moments words appear to be exchange between them. Madam Professor is left to grieve alone, as Number 6 enters the house. I can only imagine that when Number 6 pays that call on ex-Madam Professor that it’s not simply to pay his respects in order to console her. There is always a reason why Number 6 does something, and when he goes into the house I can only imagine that it’s to make a search of it. But what he expects to find there I cannot imagine, unless he’s simply making sure! And yet can I be sure the Professor really was electrocuted to death? People have suffered fibrillation from electric shocks as low as 49 volts and survived, but currents between 100 and 200 milliamps are likely fatal, but this depends on duration and other factors. So it is possible that both the Professor and Number 12 survived the electrical shock from the General, as we do not know the voltage of that shock. Which means Madam Professor might not be a widow, just worried about her husband who is still being treated by the doctor. As for Number 6 going into the house, well perhaps he’s just paying the patient a visit, as with most things in ‘the Prisoner,’ it’s a question of interpretation.

Be seeing you
Posted by David Stimpson at 06:58