I was think about ‘Dance of The Dead,’ and thought about how the 4 Mini-Mokes appear together for the first time in the series, as only 3 appear together in ‘Arrival,’ and ‘Free For All.’ More than that I observed the subtle differences in the Mokes, and decided to make a case study of them. So Mini-Mokes are small 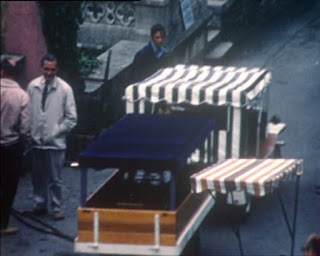 mules, they are small open vehicles used as taxis in the village, or at times as an ambulance towing a Red Cross trailer behind it. At one point one of the taxis was converted into a hearse, given a black and white striped canopy pictured here. This hearse was employed at Cobb’s funeral in ‘Arrival,’ and can be seen again in the background as Number 6 Curtis is talking to Number 24 and about to leave The Village. At first glance the taxis look identical, and yet they are individual to each other. Some have a candy striped canopy, whilst an orange and white canopy features. One has a distinctive black front bumper, although one of the 4 taxis in ‘Dance of The Dead’ has its front bumper missing. As it turns out it was the black bumper which has been removed! One Moke is fitted with two black wing mirrors, whilst another has a chrome wing mirror on the driver’s side, while the two other Mokes have no wing mirrors. At times the taxis are fitted with radio aerials either by a blue or orange attachment, and is usually attached to the front off-side mudguard, but in ‘The General’ the aerial is fitted to the nearside front mud guard! Moreover, the Moke driven by the white Queen has its aerial attached to the right side of the bonnet! I have always understood that the possession of a radio is against the rules. But I suppose a taxi service would be exempt for obvious reasons. But even so if a transmitting radio was to fall into the hands of say Number 6 for example….which makes me wonder when Number 6 stole an aerial off one of the taxis he didn’t steal the radio transmitter as well. It would have saved the Rook having to steal all that electrical equipment in order to construct a radio. But perhaps it was a question of time, as he wouldn’t have been able to simply rip the radio out of the taxi.

Most taxis have a front and rear taxi plate, but on one Moke the rear plate is missing, however that is not the casewhen Mini-Mokes are put to other uses in the Village. In some circumstances the plates are simply blacked out, in the case of the bomb disposal unit and given the most awful squeaky siren, and by security guards during the evacuation of the village. One Mini-Moke must have been new to The Village at the time, because someone had forgotten to remove its original licence plate 709C. In ‘Hammer Into Anvil’ the Mini-Moke driven by Number 14 has neither blacked out plates nor taxi plates, it has no plates at all! One has no spare wheel cover, another has a blacked out rear taxi plate, or has a front taxi plate but no rear taxi plate. 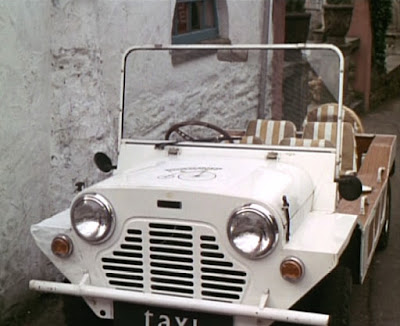 The Mini-Moke in ‘Many Happy Returns’ has damage to front off-side mudguard, which suggests it has been in a collision at some point, and the repair looks to have been hurriedly done. 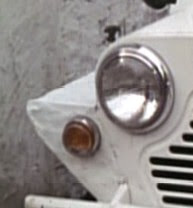 It is documented that the Mini-Moke 709C was involved in an accident on its way from Elstree to Portmeirion, and had to be taken back to to be repaired. So is this Mini Moke, in the picture, 709C? However
having studied the relevant film footage of ‘Dance of The Dead’ I could not discern any such damage to any of the four Mokes, not even to 709C in ‘Living In Harmony!’ Only to this Mini-Moke used in ‘Many Happy Returns.’ So perhaps the damage to it didn’t occur in September 1966, but in March 1967. While I was carrying out this in-depth study, I realized for the first time in 51 years, that No.6’s transport for the election was changed from candy-striped seat upholstery, to the orange and white stripes. Was there a mechanical problem with the first Moke so that it had to be changed. Or was it simply another of those continuity errors which plague ‘the Prisoner?’ This all began with my having noticed the damage to the Mini-Moke’s off-side front wing, because I am curious about it. And that lead me to make note of the differences between the village taxis, which at first glance look to be identical. As for the fact that one of the four Mini-Mokes having orange and white stripes rather than the candy stripe, perhaps Wood & Pickett who converted the Mokes for ‘the Prisoner in the summer of 1966 had run out of the candy striped material!

Be seeing you
Posted by David Stimpson at 07:19