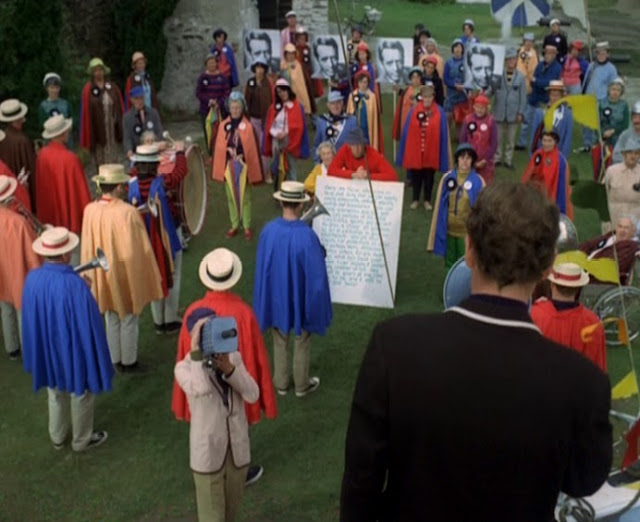 A vote for Number 6 is a vote for the security of the citizens as your local candidate stands for election as once again he takes to the hustings.

“There are those who come in here and deny we can provide every conceivable civilized amenity within our boundaries.”

“What’s he banging on about now? Did you hear his election speech on the telly yesterday?”
“Yes, I tried to switch him off, but the on-off switch doesn’t work!”
“He said the community being able to rest assured that our interests are very much his own, and that the security of the citizens will be his primary objective. He sounded like No.2 already!”
“I heard he tried to escape.”
“Escape from where?”
“Here.”
“Will you two be quiet, I want to here want he has to say.”
“You can enjoy yourselves and you will. You can take partake of the most hazardous sports and you will.”
“He doesn’t mean Kosho does he, he’s not making me take part in that it’s far too dangerous!”
“The price is cheap, all you have to do is give us information.”
“Oh here we go, and if you don’t give it, they take it!”
“You are then eligible for promotion to other and perhaps more attractive spheres where do you desire to go?”
“They let Cobb go, they released him from the village to go on to more attractive spheres as he goes to serve his new masters.”
“I wouldn’t mind going to Skegness.”

“Place your trust in the old regime their policies defined the future certain, the old regime forever and the old Number Two forever. Confession by coercion is that what you want? Vote for him and you have it, or stand firm upon this electoral platform and speak a word without fear the word is…..freedom. They say six of one and half a dozen of the other, not here, it’s Six for Two and Two for nothing and Six for free for all for free for all vote, vote.”

“I must say Number 6 seems to be doing pretty well.”
“Yes, but freedom what does he mean by that.”
“You mustn’t say that!”
“Say that word, freedom, I mentioned it once but I think I got away with it.”
“What about Number 2, what does he do in his spare time?”
“And another thing you mustn’t do here is to enquire.”
“He said he can’t afford spare time because he’s working to his limit. I mean we’re all entitled to spare time, Number 6 says leisure is our right.”
“What less work and more play, do you want half-day closing?”
“I wonder what Number 6 does in his spare time?”
“He doesn’t do anything, I’ve never seen him do a stroke of work since he arrived here!”
“I think he’s just out for himself, his words don’t ring richly in my ears.”
“Mine neither, let’s go to the café for a coffee.”
“What do you do in your spare time?”
“We go to the café mate!” a voice shouted from the back.