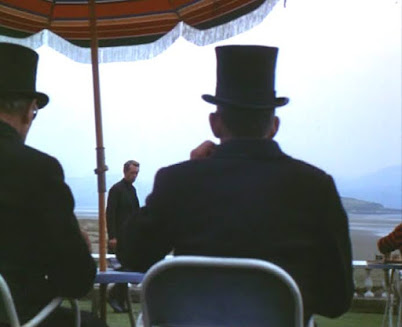 “Who’s that?”
“No idea.”
“Doesn’t look very happy does he?”
“He’s obviously a new arrival.”
“How do you make that out?”
“He’s wearing his own clothes.”
“Yes, but then so are we!”
“Yes but WE are in uniform!”
“Ah that makes all the difference!”
“I wonder who he is?”
“Perhaps he’s an inspector.”
“An inspector, what a Police Inspector you mean?”
“What would a Police Inspector be doing here, there hasn’t been a crime committed has there?”
“Not that I’m aware of.”
“No-one’s been murdered?”
“No.”
“Well then.”
“Number 2 does seem to be giving him the half crown tour of the village.”
“He is an inspector, here to inspect the village, to inspect us!”
“He’s staring at us!”
“I know, act nonchalant. Finish your tea and we’ll go.”
“Go, go where, I was going to have another tea and slice of toast.”
“If he’s an inspector we’d best get back and tidy the office.”
“Oh crickey!”
“What now?”
“The picture of Number 2!”
“You mean the one pinned to the dartboard.”
“Yes.”
“The picture you’ve been throwing darts at!”
“You’re right, drink up and we’ll go.”


Be seeing you
Posted by David Stimpson at 07:24