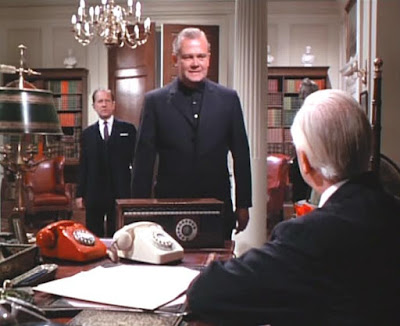 PR12 “The Colonel is here to see you Sir Charles.”
“I can see that, I thought……yes I’m sure we did, we sent the Colonel on assignment to the village.”
“We did sir.”
“Then what are you doing back here Colonel?”
The Colonel “Sir Charles………”
“Yes.”
“Look what they have done to me!”
“What have they done to you?”
“They changed my mind, and made me wear these clothes!”
“You’re dressed like my future son-in-law!”
“Sir Charles I am your future son-in-law!”
“My daughter is going to marry you?”
“Yes Sir Charles.”
“I didn’t know you knew her!”
“I’m sorry?”
“Oh don’t be sorry, if my daughter wants to marry you Colonel, well who am I to stop her?”
“No Sir Charles, I’m ZM73.”
“Really, then why do you look like the Colonel?”
“Someone has played an awful trick on me!”
“I don’t think my daughter will like you looking like that.”
“Just a minute…….you said you sent me to the village!”
“Well I didn’t send you exactly, I sent the Colonel.”
“And here I am in his body, while mine lies somewhere over the sea, back in the village.”
“The village!”
“You know about the village because you admit to sending the Colonel there.”
“And you claim to be ZM73.”
“Yes.”
“Answer me something, why should you, the Colonel, claim to be ZM73?”
“He doesn’t, I claim to be ZM73.”
“I think you got hold of ZM73’s clothes and in impersonating him managed to escape the village in order to avoid something being done to you. Then having escaped you come back here with this trumped up story. If I were you Colonel I would go back to your office and think about your current situation, a situation you may not be in for much longer. While I contact Number 1 and try to explain how you managed to escape!”
“Making love to my daughter is one thing, but trying to pull the wool over my eyes is another!”
“I never did!”
“Colonel I don’t care what you did or didn’t do, do you know where Seltzman is?”
“Yes.”
“Then go and find him Colonel, go and find him. Then you might be able to extricate yourself from your current situation.”