The End of Village Life! 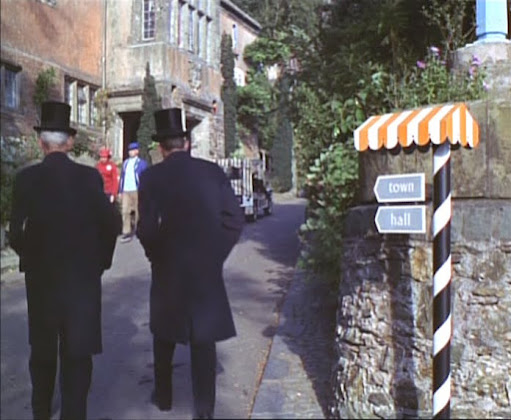 “You have heard the rumour of course.”
“No, what rumour?”
“That he’s stopped writing his village blog!”
“Who has?”
“The author.”
“Why has he decided to do that do you think?”
“If you want my opinion I think its because he’s reached his limit on the subject, he’s been writing his blog for almost eleven years, and if he hadn’t turned to writing Prisoner based fiction he would have had to start writing about the series right from the beginning again!!”
“Would he?”
“You know what it means of course.”
“No, but I expect you’ll tell me.”
“It means no more scenic walks to the Town Hall. No more tea and buns at the café!”
“No!”
“Yes.”
“And after the good service we have given to this blog of his!”
“Yes we do seem to have proved rather popular with the readers.”
“Just a minute, isn’t this and the previous 5 entries, pieces of blog then?”
“Well yes it is, but not of his usual style, it’s almost as though he’s going through some elaborate resignation!”
“Has he resigned?”
“No I don’t think so.”
“Pity we could have taken steps!”
“Perhaps he’s up to something, perhaps he has something in mind.”
“Then we had better take steps, I’ll get the hearse!”
“If you want my opinion I think something’s brewing, I think something has been brewing for some time!”
“Yes……I can smell it, coffee!”
“That means the café’s open!”
“Shall we?”
“For the last time then.”
“Is it my turn to pay again?”
“No my friend I wouldn’t hear of it, two coffees with buttered toast.”
“And jam.”
“International?”
“No, continental!”
“Can I borrow your credit card?”
“I thought you were going to pay?”
“I would, but all my week’s credit allowance has been used up!”
“It would be!”

Be seeing you chaps!