60 Second Interview with No.12 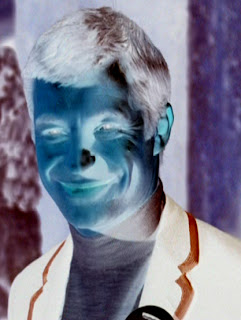 No.113 'So, you were a conspirator with No.6 against the Village.' No.12 'If you want to put it that way.'
No.113b 'Smile' {click goes the camera}
'What other way is there Number Twelve?'
'We might have been conspirators, but against the General, and Speedlearn. We were simply following the Professor's lead.'
'Which was?'
'That Speedlearn is an abomination, that the General must be destroyed.'
'You are remakably open in your confession?'
'I can afford to be, given my new circumstances.'
'And you placed your trust in Number Six?'
'His only subject was getting away from this place!'
'You were kindred spirits?'
'I suppose so.'
'You told him to join the club?'
'What was wrong with that? Even Number Two wanted out, he said as much to Madam Professor.'
'What did he say to Madam Professor?'
'That Number Six wants what we all want ultimately, to escape.'
'Treasonable thoughts.'
'Expressed in words, which were not held against him.'
'You were a small cog in the machine.'
'In Administration, and without such small cogs the machine breaks down.'
'You didn't guard your words!'
'Against the Professor, no. Nor did I mince them. I was right though, wasn't I?'
'In what way?'
'I warned Number Two that the Professor was a crank, and that he attracts trouble makers.'
'You and Number Six both!'
'Yes.'
'You were not in favour of Speedlearn?'
'Well they were not getting it right, were they?'
'Wern't they?'
'What was the treaty of Adrianople?'
'September 1829.'
'Wrong. I said what, not when. You're like Number Six, you need some special coaching.'
'You supplied Number Six with two Security Pass discs.'
'Yes, and the uniform of a Top-Hat Administrator.'
'When he came to see you that time in your office.'
'Yes.'
'And sabotage?'
'A simple piece of fuse wire across the contacts of a lightbulb.'
Yet in the end you attempted to save the Professor's life.'
'It looks that way doesn't it?'
'What other way is there?'
'Attempted suicide.'
'And you.......?'
'Apparently I died in the attempt' the spectre replied, as like an old soldier he simply faded away.