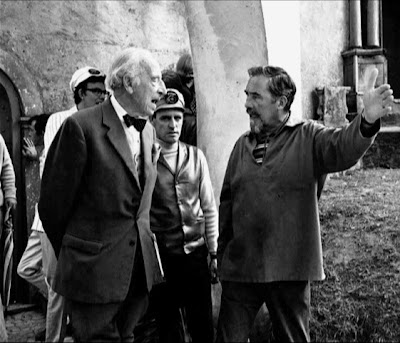 Director Don Chaffey talks with architect and designer of Portmeirion, Clough Williams-Ellis. Clough used to keep the film crew under the closest possible surveillance, and could often be seen following the filming, and clearing up any litter left behind by the crew. Clough only agreed to allow filming of the Prisoner on the proviso that the Italianate Village would still be open for guests, and day visitors alike. I'm sure the money paid would also have come in useful.
Some twenty years after Clough Williams-Ellis' death, his ashes were placed in a small rocket, which was exploded over Portmeirion, and so too the ashes of Clough, which had been his wish.
Be seeing you.
Posted by David Stimpson at 08:20