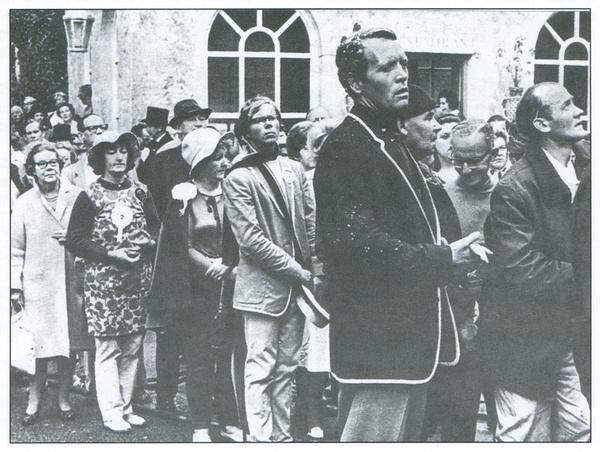 Partick McGoohan 'What's going on here? I didn't say break for lunch!'
{People muttering amongst themselves}
'What's going on here?'
Voice at the back, 'I think they called for a crowd scene.'
Woman, 'Well they got that bit right.'
Man, 'Who's the bloke in the piped blazer?'
'Don't you know, that's Patrick McGoohan.'
Voice, 'What are we queuing up for, have they brought rationing back?'
Man, 'Someone said we were going to get paid today.'
Woman, 'That can't be right surely. I think somethings going on over there.'
Voice at the back , 'What?'
Man 'I don't know, I can't see!'
'Isn't is exciting?'
'What?'
'Being involved in something which will one day become a cult, we'll be famous.'
'We won't be famous. We'll be just faces in the crowd, a figure in long shot'
'Yeah, either that or edited out and dropped on the Cutting Room floor!'
'What is it we're supposed to shout?'
'Haven't you been listening to the director?'
'I was on a toilet break.'
'Six for Two, Six for Two, Six for Two, with intermittent shouts of vote, vote, vote, and progress, progress, progress all at the right times.'
Voice at the back 'Did you see that 'thing' they rolled out of the back of that lorry the other day?'
Woman 'I did, a funny looking thing. A sort of dome with a blue light on the top.'
Man, I saw it too, It was a Go-Kart, the dome was put on top, and a man sat inside.'
'It kicked up an awful noise.'
'What was it supposed to be?'
Man, 'One chap told me it was supposed to be the Village Guardian.'
Woman, 'Well I was talking to a chap out of Properties, and he told me that it's Rover. It was supposed to climb up steps. Go on the land, up walls, on the water as a ship, and as a Submarine in the water.'
'What happened?'
'It sank!'
'They found it again, and put it back on the lorry. Now they've got a load of balloons.'
'Balloon's, what do they want ballons for?'
'Perhaps we're going to have a party!'
Voice at the back, 'I saw them practising with one of them balloons, they were trying to suffocate someone with it!'
'Who?'
'Oh I don't know, some chap in a pink blazer.'
'Tell me why we're queuing up again?'
Voice from the back 'We're going to be given costumes.'
Man, 'Some of us have our own already!'
Woman 'What like him in his old school blazer!'
Voice at the back, 'All this for just Two pounds ten shillings a day.'
Patrick McGoohan 'Can we get on with it Tomblin....haven't got all day you know!'

BCNU
Posted by David Stimpson at 09:32