This Week I Am Most Watching - THEPRIS6NER 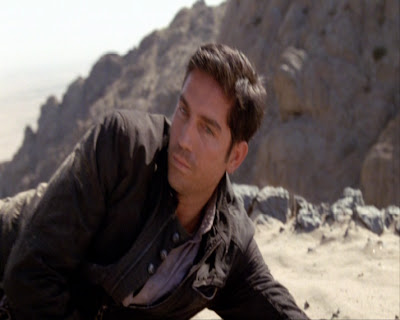 Yes its that time again, to watch this much underrated series, and the fifth time of watching for me since its British premeir in 2010. I still have much appreciation for the series, although I think I have written all I can on the series in previously posted blog.
Last night I began to see certain continuity errors in Arrival, the fact that at one point, just before the Prisoner helps the old man out in the desert, just for a few seconds, the Prisoner is wearing a different coloured shirt to the one he's wearing here. Then later after Six has stolen 147's taxi, he goes climbing the dunes and hills out in the desert, wearing a green jersey. He is still wearing that same jersey when 313 finds Six lying in the sand out there in the desert, and he's still wearing that jersey when he's lying in the back of 313's car. But as they arrive back in the Village, he's also wearing a green jacket, which he didn't have with him before! I suppose this goes to show how well I'm getting to know THEPRIS6NER09.
A man wakes up in the desert, he doesn't know how he came to be there. Back in New York he has resigned his job from Summakor. The Prisoner tells Two that he wants to go back to New York. Two tells Six that there is no New York, there is only the Village. Inside Six knows that Six is Six, because Six is Village. That there is no out, there is only in. Six wants to escape, but there is no escape. To the old man 93 the Prisoner is a bloody miracle, because he doesn't come from there.
Something else which I have observed - no-one in the Village actually pays for anything! In the Village of the original series, a taxi driver would have charged two Work Units for a taxi ride 'that will be two units' the dirver says 'Units?' asks the Prisoner 'Oh well, pay me nxt time, be seeing you.' But in new Village, 147 takes the Prisoner on two or three taxi rides, and never once attempts to collect the fare from his passenger! In the Village Shop, the shopkeeper asks the Prisoner what he can do for him, Six asks for a map and the Shopkeeper 37927 is only too pleased to be of service. In fact he tells the Prisoner 'Buy on map, get a second free, makes the perfect gift.' The Prisoner actually walks out of the Village Shop with one of the two maps in his pocket, yet once again the Shopkeeper makes no attempt to collect the money!
And there I was thinking I'd written everything there is to be written about THEPRIS6NER09, just goes to show you there's more to the series than first meets the eye.    Be seeing you
'Breathe in, breathe out, Village life goes on.'
Posted by David Stimpson at 09:13