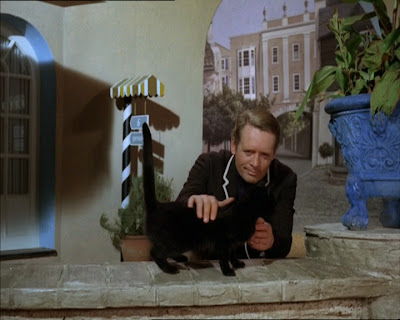 We might not know the Prisoner's name outside of the Village, Number Six being his name while he is here, but it does appear that No.6 is a cat lover. Seen here stroking the Village cat, in a few moments he'll take the cat into his cottage and give it a saucer of cream. Later, at Curfew, the cat will be lying on his bed. Instead of disturbing the cat, No.6 reclines on his leather recliner.
Something else - because of the remastering of the 35mm film of the Prisoner, which has taken place more than twice, it means the viewer can enjoy watching the series is a clarity never before enjoyed. It also means you get to see the bones of the Prisoner, by that I mean the fact that here the background of the scene with No.6 and the cat from Dance of the Dead, is not in fact Portmeirion, but a large painted back-drop at the MGM film Studio! Remastering of old films, and television series of yesterday, is not always a good thing.
I'll be seeing you.
Posted by David Stimpson at 08:45