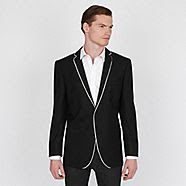 Once upon a time there was only one way for a fan of the Prisoner was to have his or indeed her own piped blazer, and that was to make your own. Which would be in keeping with many of the home-made piped blazers seen in the Prisoner series, they're not exactly made to the highest standard, if you look at them closely.
I myself purchased a blazer from Fosters, a store chain now long gone I believe. I went to a local haberdashery store and bought a length of piping, went back to Fosters and their people added the piping to the blazer for me. That was back in 1990, and do you know, that blazer still fits me today some twelve years on. Then in 1994 I had another piped blazer made for me. This time it was an actual school blazer from a school outfitters, yes you can believe it.
But then from 2000 the Prisoner shop at Portmeirion began to sell piped blazers for around £60 I think it was, a bit on the pricey side, and they were not of the best quality for that price. But I suppose if you have the money and want a piped balzer badly enough...... for the past few years piped blazers and jackets have been all the fashion for women,and eventually for men, so I can wear my piped blazer because of the Prisoner and because they are the fashion. Now Debanhams are selling piped blazers, as seen in the above picture. And the price £99, that fashionable enough for you?
Recently I purchased another piped jacket, a dark cream one with white piping, it's very subtle, and quite new Village. I purchased it from TKMAX for the price of £15, the original price being £69, a bargain.
Be seeing you
Posted by David Stimpson at 09:42