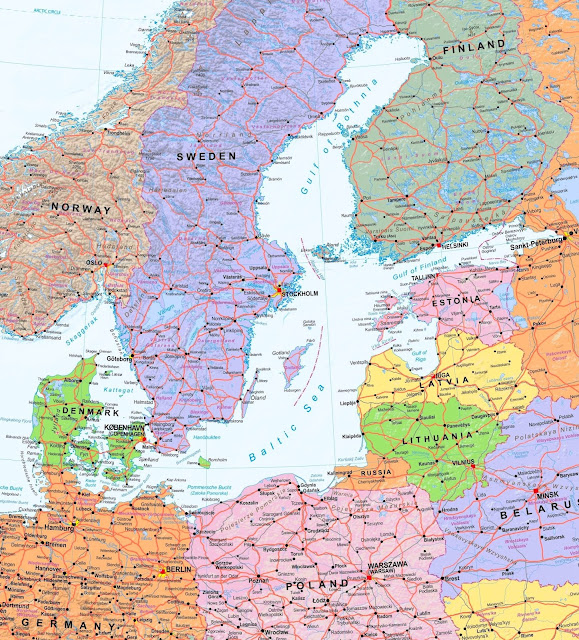 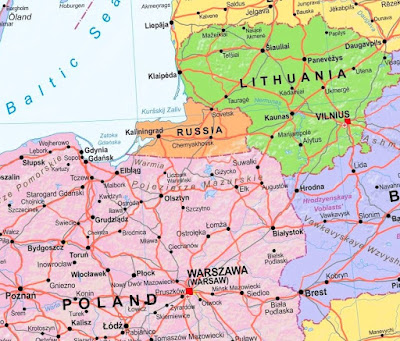 To borrow one of No.2’s sayings, well it isn’t really, “The Devil is in the detail,” well not in this instance he isn’t! According to Nadia the location of the village is in Lithuania 30 miles from the Polish border. As it happens there is the 100 mile or so coastline of the Russian territory of Kaliningrad Oblast

which is the only Baltic sea port of Russia, which lies between Lithuania and Poland. Quite obviously scriptwriter Vincent Tilsley had forgotten, or had not taken into account, that length of coastline when he worked out the location of the village.
Nadia’s file claimed that at the age of 17 she had been an International swimmer, an Olympic bronze medallist. No.6 had been on an Olympic fencing team, we learned that during the fencing scene during ‘The Schizoid Man.’ Yes it was No.12/Curtis who said it, but he was impersonating No.6 at the time.
When it comes to Nadia it pays for a “plant” to have her story straight, mind you No.2 didn’t help when he said that No.8 had been brought to the village because of suffering from nervous tension, that she’s been brought to the village to recuperate. Nadia told No.6 that she had committed no crime; all she had done was to resign. No doubt this was to play on No.6’s sympathies seeing as he was in the same boat as Nadia having resigned from his own job. So perhaps Nadia had the right of it, and No.2 was simply having a joke with No.6. But then in the hospital why did No.2 tell No.6 that No.8’s not at all important, saying that he was surprised they had even sent her to the village. An Estonian working for the Russians who resigned her job, there would have been worse places the KGB could have sent her, a Gulag in Siberia for one! But she wasn’t, and she didn’t, but she was to return to where….to where? Presumably to London to make her report to those “masters” we heard about from time to time. Not to No.1 then? Shouldn’t think so, after all at the end Nadia is dressed in a fur coat and looked to be ready the leave the village.
File No2. section 12 page one, paragraph one, line one, when you think about it No.1 doesn’t enter into it during ‘The Chimes of Big Ben.’ No.2 doesn’t make a report to No.1 at any time, in fact when he does make a note or amendment to a report, he does so using a small square recording device. What think you, a futuristic digital recorder perhaps?
During ‘The Alternative Chimes of Big Ben’ No.6 uses a much older device, which he made himself for his first woodworking project, a Triquetrum which is derived from the Latin tri “three” and quetrum “cornered” and was the medieval name for an ancient astronomical instrument first described by Ptolemy who called it a parallactic instrument and seems to have used it to determine the zenith distance and parallax of the Moon. No.6’s homemade device is a crude device, not one hundred percent accurate. I’m never sure if No.6 is describing Ptolemy’s Triquetrum, or the crude device No.6 made for himself!
File No.2, section 12 paragraph 3, subsection 2 add Christopher Benjamin played the Labour Exchange manager in ‘Arrival,’ yet during ‘The Chimes of Big Ben’ he’s assistant to No.2. Was this promotion for No.20 the Labour Exchange manager? He’s certainly had a change in number, as well as a change in costume, dressed as a No.2 in fact, except  for the piped blazer, but then one No.2 has been known to wear a piped blazer. So No.20 becomes No.10, but his promotion doesn’t seem to have lasted all that long, for one scene as it happens, because the next time we see No.10 he’s in the control room, possibly now demoted to assistant to the supervisor, seeing as this No.2 doesn’t really warrant or need an assistant. On the other hand perhaps this No.2 took against his assistant’s remark about there being methods they haven’t tried against No.6 yet!
File No.2, section 12 paragraph 3, subsection 2 add when it comes to the two roles played by Christopher Benjamin in ‘Arrival’ and ‘Chimes’  we could be dealing with another case of identical twins, or doppelgangers!
Although ‘The Chimes of Big Ben’ has some of the most memorable, and sparkling lines of dialogue in the series, and is rich in humour, the surprise of the plot only works on the first time of viewing. I recall when I first watched the episode in 1967, how I thought No.6 had actually managed to escape the village when that crate arrived in that office No.6 knew very well, in London. Poor old No.6, they even rubbed salt into his wounds by announcing a great new competition seascapes!