Busy Potter? by our own reporter 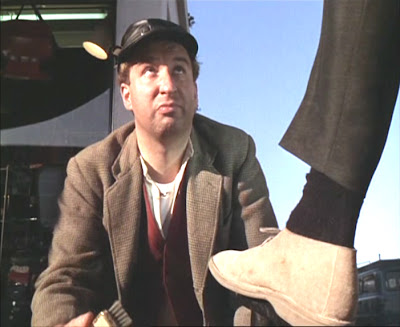 The act of betrayal is nothing unusual in the village, and this is nothing new to No.6, such was his betrayal by old friends and colleagues such as the Colonel and Fotheringay. But what about Potter, pictured here as John Drakes contact man in during the 'Danger Man' episode 'Koroshi.'

And again here during the episode 'The Girl Who Was Death,' Potter, John Drake's contact man in the field.
But it seems that even Potter has succumbed to the lure of the village, and judging by his position, that of being assistant to No.2, Potter-No.14 was in all probability, seconded to the village willingly.
Potter-No.14 "There are methods we haven't used yet of course."
No.2: "Fascinating."
Potter-No.14: "He Doesn't even bend a little."
No.2: "That's why he'll break. It only needs one small thing. If he will answer one simple question the rest will follow. Why did he resign?"
So Potter-No.14 doesn't mind the way his old colleague was being treated, possibly by his own people if the Colonel, Fotheringay, and of course Potter is anything to go by. Potter even suggests to No.2 that there are methods they haven't used yet!
It also seems that Potter-No.14 is doing very nicely in the village, having been promoted to No.2's assistant during The Chimes of Big Ben, because previously he was the Labour Exchange Manager-No.20 in Arrival, pictured here.
In fact Potter-No.20, was the second person to interrogate his ex-colleague the Prisoner.
Potter-No.20: "And now the questionnaire. If you just fill in your race, religion, hobbies... What you like to read, what you like to eat. What you were, what you want to be... Any family illnesses... Any politics?"
It's no wonder the Prisoner lost his temper, smashing No.20's wooden toy gizmo, and then storming out of the Labour Exchange office. Being interrogated by Potter, an old friend and once colleague must have rubbed salt into the wound of his abduction to the village. The realisation that his own people were responsible, judging by Potter's presence in the village.
Mind you, there is another Potter who puts in an appearance in the episode Do Not Forsake Me Oh My Darling, and he's pictured here.

It is not known whether or not this Potter is supposed to be the first Potter or not. I think however that had it been possible for this second Potter in the series, who the Colonel/No.6 told Professor Seltzman "Potter, we must not be taken by him!", to have been played by Christopher Benjamin would have been better, and would have added a little continuity between episodes.

Your own reporter
Photographs from the Department of Visual records
Posted by David Stimpson at 08:05