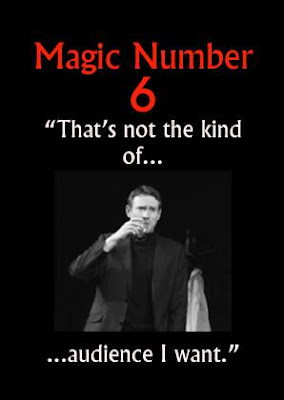 ﻿    Last night my wife and I attended an "a guest list only" performance of MAGIC NUMBER 6, the final dress rehearsal of the play before being performed at the Edinburgh Fringe Festival.
https://www.edfringe.com/whats-on/theatre/magic-number-six

The performance began at eight pm, and ran exactly to fity-five minutes, which is the alloted time slot for the play at the Fringe. 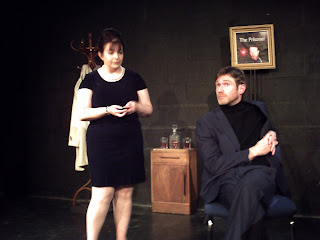 It was a masterful peformance as ever by Rob Leeson as Patrick McGoohan, and Colin Woods as Lew Grade, with Tracy Gee who plays Miss Cartwright Grade's assistant. 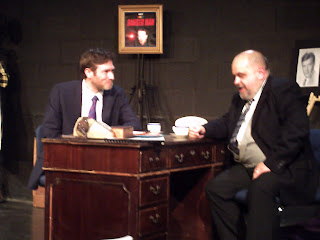 Although I have seen the play previously, it did not spoil my enjoyment of MAGIC NUMBER 6. Rob Leeson has grown into the character of Patrick McGoohan to give a commanding performance. Colin Woods was entertaining in his role as he trasnformed himself into the character of Lew Grade. Tracy Gee who took on the role of Miss Cartwright, valiantly fought her corner against formidable opposision.
You can watch video clips of the play via the following links
http://youtu.be/sopBCACUSW8 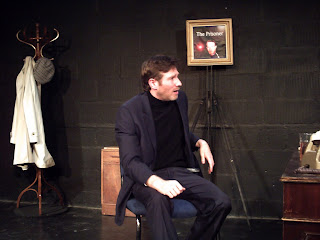 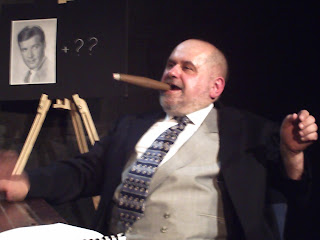 The play was thoroughly enjoyable {although I have seen it before} although perhaps for some members of the audience who are not completely au fait with what happened during the actual meetings with Patrick McGoohan and Lew Grade might find it rather perplexing, but then that is all part and parcel of the actual series of 'the Prisoner,' and makes the play nonetheless enjoyable for that. The fifty-five minutes duration of the play passed by in a flash, and at the end I felt I had been thoroughly entertained. I enjoyed every moment, and strongly recommend any of my readers who are intending to attend the Fringe Festival at Edinburgh, or anyone, to not miss the chance of seeing this remarkable production. 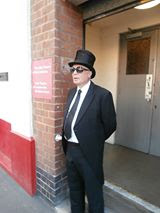 Carolos Dandolo - Director of MAGIC NUMBER 6 and the Master of ceremonies at last night's dress rehearsal.
All that remains for me is to wish Paul Gosling {author} Carolos Dandolo {Director} Rob Leeson {Pat McGoohan} Colin Woods {Lew Grade} Tracy Gee {Miss Cartwright} and Karen Gordon {also Miss Cartwright}, all the very best with the play at the Edinburgh Fringe Festival.


Be seeing you
Posted by David Stimpson at 10:49